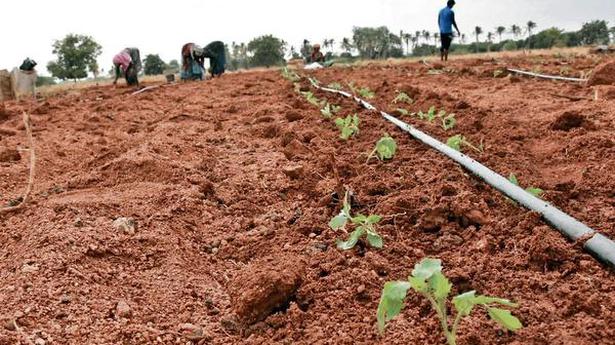 Rains for the past 48 hours has revived hopes among the groundnut farmers of reaping a reasonable crop, in Anantapur district and to their satisfaction rains are continuing in many mandals even on Monday evening.

“Sowing of pulses also picked up and out of a normal of 82,006 hectares, 25,497 was covered by Monday recording 31% coverage, something we had not expected following scanty rainfall in the beginning of the kharif season and -55% deficit rainfall recorded till August 15,” said Agriculture Joint Director Habib Basha.

The overall sowing in kharif touched 42% on Monday and there was a scope of further increase with a forecast of 20mm rainfall in the district by Wednesday morning.

Agrometeorologist S. Malleswari Sadhineni told The Hindu that there was a low pressure system over Tamil Nadu and rain bearing cloud cover over Chittoor district in Madanapalle, Kadiri in Anantapur and some eastern mandals of Anantapur, which could result in a rainfall of 10 to 20 mm over the next 36 hours.

While the overall rainfall deficit of the district, which was highest in Andhra Pradesh has come down to last but one position pushing Kadapa to the top position with -49%.

Ms. Malleswari does not recommend sowing of groundnut at time of the year as there was very little possibility of rain during November-end December, when the crop requires good rain for full yield and predicts pest problems and loss of yield to the tune of 50%. Similarly tomatoes, which are flooding the market with prices crashing drastically and retail prices falling to ₹8 and ₹10 a kg should not be sown again, but many farmers have sown now in 9,000 hectares and 3,000 hectares of beans, while district stares at a dry spell till September middle.

In Anantapur district, Kanekal, Atmakur and Chenekothapalli recorded excess rainfall for this season and 10 mandals normal rainfall, while 21 mandals have deficit above -60 mm and upto -80mm, but remaining 19 mandals have scanty rainfall with deficit ranging from -19mm to -59mm for current monsoon. The agrometeorologist suggests sowing of bajra, foxtail millet, cowpea and horse gram as alternative crops and the Agriculture Department has already distributed 15,000 quintals of these seeds to 1,697 farmers under contingency plan.

Members of the Tamil Nadu State Sand Lorry Owners’ Federation want online sale of river sand to be streamlined according to the supply available. The State has a demand for nearly 20,000 loads of sand daily. But, only 1,000 loads were being provided. While nearly 87,000 vehicles have registered for purchase of sand online, only […]