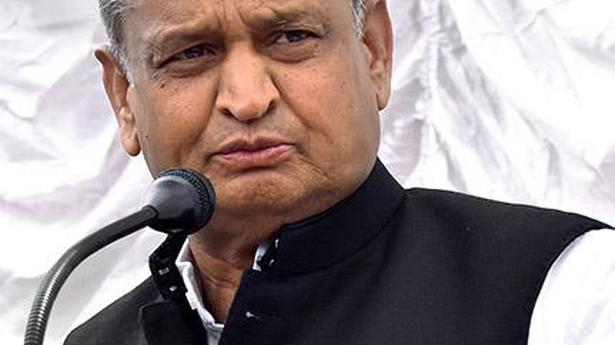 Rajasthan Chief Minister Ashok Gehlot will present the 2019-2020 budget on July 10 in the Assembly. The date was decided by the Business Advisory Committee at its meeting convened in the Assembly on Thursday, the opening day of the budget session. Mr. Gehlot also holds the Finance portfolio.

The second session of the 15th State Assembly started with the members paying tributes to Rajasthan BJP president and Rajya Sabha MP late Madan Lal Saini, former Goa Chief Minister Manohar Parrikar and the victims of a mishap at Jasol in Barmer district last week, when a tent fell on a crowd during a religious event.

The Congress Legislature Party passed a resolution expressing faith in the leadership of Rahul Gandhi and requested him to continue as the party president. In a meeting held at Mr. Gehlot’s residence before the session commenced, the CLP also resolved to counter the “smear campaign” of the Opposition against the government.

Attacking the State government, leader of the Opposition Gulab Chand Kataria said: “The ruling Congress has failed to fulfil the promises made in its election manifesto. The failure of loan waiver scheme has led to suicides by farmers… One of them, Sohan Lal of Sriganganagar district, blamed Mr. Gehlot for his death in his suicide note,” he said.

Assembly Speaker C.P. Joshi has given instructions for supplying all budgetary documents and annual reports of government departments in electronic form to the MLAs and making them available online to the public.

The proposal was initiated by the then Independent MLA from Fatehpur, Nand Kishore Maharia, in the previous Assembly.

Journalists covering the Assembly proceedings staged a demonstration outside Assembly Speaker C.P. Joshi’s office, demanding the withdrawal of new rules restricting their movement in the House.

The new arrangement has limited journalists’ access only to the press gallery in the Assembly and the press room on the premises and curtailed their entry into the office rooms of Ministers.

The Amma Makkal Munnetra Kazhagam (AMMK) will seek the support of the DMK in the Assembly to overthrow the AIADMK government, the party’s propaganda secretary, Thanga Tamilselvan, said here on Tuesday. Speaking to reporters, he said that when the counting of votes ends on the evening of May 23, the end of the AIADMK government […]

The Supreme Court on Tuesday agreed to urgently list a petition filed by Anuradha Bhasin, Executive Editor of Kashmir Times against the information blackout and restrictions imposed on media freedom during the Centre’s “unilateral” move to impose curfew and unravel the unique federal structure of India by dividing Jammu and Kashmir “without taking consent from […]