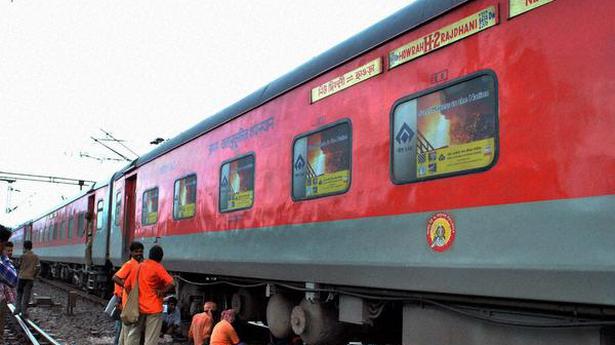 The country’s first Rajdhani Express, which revolutionised Indian Railways by way of speed and luxury in the 1960s, turned 50 on Sunday. Decorated with red and yellow marigold flowers it chugged out of Howrah station on its golden jubilee run.

An Eastern Railway (ER) official said the Kolkata-New Delhi Rajdhani Express embarked on its first journey on March 3, 1969 from Howrah, making it the country’s first fully-airconditioned, high-speed train that covered the 1,450 km stretch in 17 hours and 20 minutes.

It was flagged off by three former staffers of Rajdhani Express after ceremonial cake-cutting and release of a greeting stamp to commemorate the epoch-making event.

Senior officers of ER, including its general manager Harindra Rao, were present at platform number 9, which has been the berthing place of Rajdhani Express since inception.

Passengers on the golden jubilee run were treated to some of its old delicacies like fish fry or vegetable cutlets and ‘rosogollas’ apart from ice cream for dessert, said IRCTC (East) general manager Debasish Chandra.

Rajdhani was the first train in the country whose fares included charges for meals served.

Brand new linen and disposable napkins with greetings of “50 Years of Rajdhani Express” were distributed among the passengers, the ER official said.

The railway staff on duty wore a commemoration badge.

With the passage of time, the chair cars were replaced by AC 2-tier and AC 3-tier coaches. The number of AC first class coaches was increased, while the dining car was done away with.

The iconic train went through stages of evolution over the years, the official said, adding that the present train was upgraded with elegant makeover of existing LHB (Linke Hofmann Busch) coaches in 2017.

Goa Lokayukta Justice (retd.) P.K.Misra is examining if the documents submitted by activist lawyer Aires Rodrigues pertaining to the alleged disproportionate assets accumulated by Chief Minister Pramod Sawant could be taken as a suo motu complaint, sources in the Lokayukta Secretariat confirmed to The Hindu on Wednesday. Mr. Rodrigues on Monday had placed before the […]

Internet services across all platforms continued to remain suspended in Kashmir

Now, minor degrees in emerging technologies to be offered at engineering colleges

From this year, all engineering branches can offer courses in emerging technologies either as minor degrees or electives. The approved electives/minor degrees include artificial intelligence; Internet of Things; blockchain; robotics; quantum computing and augmented reality/virtual reality. Institutions however, cannot increase their intake for regular courses. The specialisation in emerging areas is “permitted within the approved […]