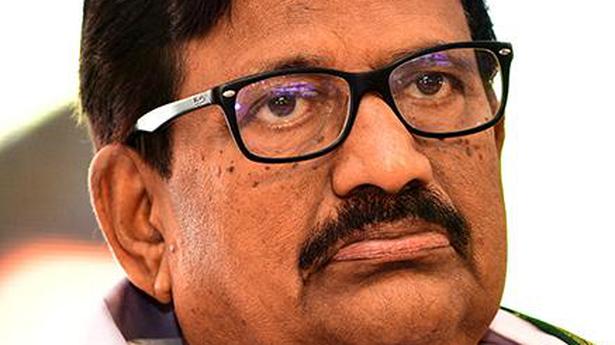 Though actor Rajinikanth’s announcement about his political plunge has created a lot of expectations, leaders of the DMK-led Secular Progressive Alliance do not expect him to break new ground in the State’s politics.

“Earlier, he said [the actor had only indicated] he had no plans to launch a party since his health was not in good condition. His argument was that it was wrong to launch a party without meeting the people. Today, he has announced that he will launch it. We do not know what he will do tomorrow. There is no point in commenting on his decision, since it is not going to benefit the people,” Mr. Alagiri said.

He disagreed that Mr. Rajinikanth’s entry might work against the DMK and its allies, since he would split the anti-incumbency votes.

“On the other hand, the BJP seems to have plans to undermine the ruling AIADMK,” he said.

The Congress leader argued that the appointment of former BJP leader R. Arjunamoorthy, as the proposed party’s chief coordinator, was an indication of the BJP’s role in the actor’s decision.

“Those with the actor clearly show the colour of his ideology. My personal advice to Mr. Rajinikanth is not to make a mistake in the last phase of his life,” he said.

According to Mr. Alagiri, had the actor joined politics in 1996, when everyone wanted his entry, he could have made a change. “He has missed opportunities. Moreover, he is representing a divisive ideology,” he said.

CPI(M) State secretary K. Balakrishnan said that whether it was actor Kamal Haasan or Rajinikanth, they were unlikely to make an impact.

“The kind of politics he is advocating will not cut ice with any of the DMK’s allies. I do not see any realignment in the DMK alliance. On the contrary, he can effect changes in the AIADMK alliance,” he said. The spiritual politics Mr. Rajinikanth is talking about will not gain currency, since no political party here has been questioning the religious faiths of people, he added.

“He said he would launch the party in January, when elections would be a couple of months away. It will be very difficult for him to make a difference in a short span of time,” he said.

DMK general secretary Duraimurugan said everyone had the right to launch a political party, but their success purely depended on the reception accorded by the people and the person’s calibre to sustain the party.

Five of a family test positive in East Godavari district

Five persons of a family tested positive for COVID-19 after another member of the family, a 28-year-old woman, was declared positive for the virus on Saturday. The family resides in the Mangalavarampeta area under Rajamahendravaram Municipal Corporation (RMC) limits in East Godavari district. “One of the five persons is a Delhi returnee. The remaining four […]

Fugitive billionaire diamantaire Nirav Modi, accused in the USD 2 billion PNB fraud case, is living openly in a swanky 8-million pound apartment in London’s West End and is now involved in a new diamond business, a British daily reported on Saturday. Nirav Modi (48), is currently living in a three-bedroom flat occupying half of […]