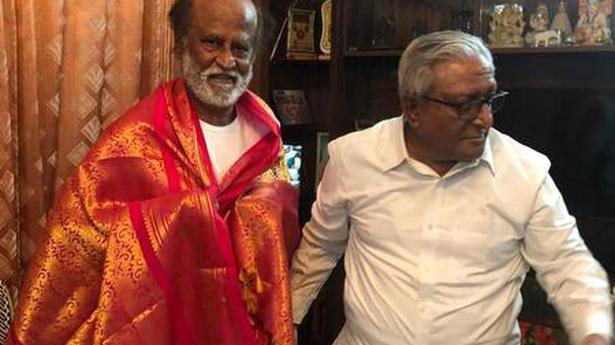 The actor travelled to Bengaluru to meet with his brother, Sathyanarayana Rao, photographs showed

Days after he made an announcement regarding his entry into politics, actor Rajinikanth travelled to Bengaluru on Sunday to visit his brother. Photographs shared by his PR team showed the actor meeting with his brother Sathyanarayana Rao, and seeking his blessings, ahead of his political plunge.

Earlier this month, the actor had said that he would be floating a political party in January to contest in the upcoming Tamil Nadu Assembly elections and an announcement regarding the same is expected on December 31.

Mr. Rajinkanth had said that in the upcoming elections, he expected to achieve a big victory with the support of the people. “Spiritual politics will emerge in Tamil Nadu that will bring transparency, honesty…politics with no corruption and one that is free of caste and religious bias,” he had said, earlier in a tweet.

The SR Engineering College has been awarded for ‘Effective Practices of Incubation Center by Engineering Institute’ at World Education Summit (WES) 2020 hosted by the State government and co-hosted by Telangana State Council of Higher Education in association with Elets Technomedia in Hyderabad on Friday. The WES awards aim to identify and acknowledge individuals, educational […]

The Tamil Nadu Higher Secondary Certificate (HSC) examination results were declared on Friday with the State securing an overall pass percentage of 91.3% compared to the 91.1% which was recorded last year. The students who took up the board exams in March were the first batch to write board exams for three consecutive years after […]