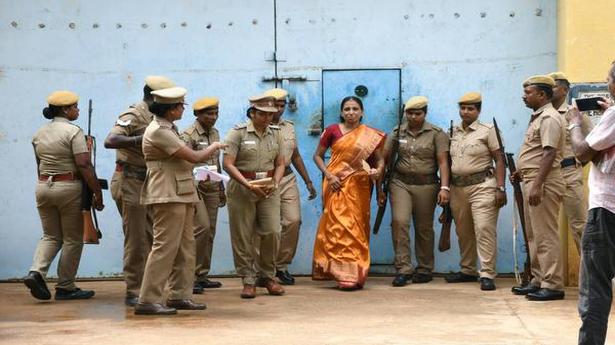 A life convict in the former Prime Minister Rajiv Gandhi’s assassination case, S. Nalini (52), was released on a month’s parole on Thursday. Amidst tight security, she came out of the Women’s Prison in Thorapadi, Vellore at 10 a.m. and she was escorted into a police vehicle.

She reached Rangapuram in Sathuvachari, Vellore, where her stay had been fixed a fortnight ago. She will stay in a house belonging to a functionary of the Dravida Iyakka Tamizhar Peravai.

The release order was passed by the Madras High Court on July 5, after she argued her case in person.

The court order says that Nalini may be allowed out of prison for 30 days parole to make arrangements for her daughter’s marriage. Her daughter resides in London.

MPs can use MPLAD funds to buy testing kits

Parliamentarians can use the funds allotted to them under the Members of Parliament Local Area Development (MPLAD) Scheme for buying testing kits and other equipment required to detect and contain coronavirus. The Ministry of Statistics and Programme Implementation, which is responsible for the implementation of the scheme, amended the rules following repeated demands from the […]