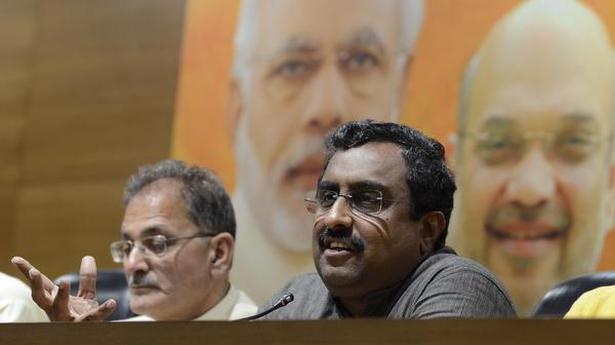 BJP national general secretary Ram Madhav asserted during the State BJP convention here on Wednesday that Narendra Modi would return as the Prime Minister after the Lok Sabha election since the “BJP will easily win 300-plus seats”. He said the party would win both the Lok Sabha seats in Manipur.

“Modi is not corrupt but also incorruptible. During the last five years, Modi has steered the country into a better economy. He is made of tough stuff and has zero tolerance to corruption,” Mr. Madhav said.

The Opposition Congress and other coalition partners of the BJP-led Ministry have read between the lines.

A senior Congress leader said: “It is now clear that the BJP is not sharing the two seats with its coalition partners since Madhav made it crystal clearthat it will plough a lonely furrow in the forthcoming polls.”

Many political parties felt the forthcoming polls would sound the death knell of the coalition ministry in Manipur.

Addressing the convention, Chief Minister N. Biren said the BJP-led government had been reaching out to the people. He claimed that in the past elected representatives used to meet voters once in five years ahead of the election. But his government had delivered the goods. Opposition Congress ridiculed it saying that Biren had been a Cabinet Minister for two terms in the Congress ministry.

One of the important issues the convention was deliberating on was the long-pending reshuffle. While other coalition partners in general and the Naga People’s Front were not happy with the ministerial berths allotted to them, BJP MLAs were of the view that numerically the BJP was now in a position to have its own ministry.While the National People’s Party with four MLAs in the 60-member House got four Cabinet berths, the Naga People’s Front got one ministerial berth — though it had four MLAs — and is not happy.

Congress sources said seven MLAs had joined the BJP in the hope of getting ministerial berths. But so far they were disappointed since the Speaker Y. Khemchand had not recognised them as BJP members and they were sitting in the Opposition benches in the Assembly.

Even a partial reopening will mean a host of changes in their functioning Source: thehindu.com Related

More than half of COVID-19 cases reported in India are in the 18-44 years age group, according to data from the Union Health Ministry. Source: thehindu.com Related