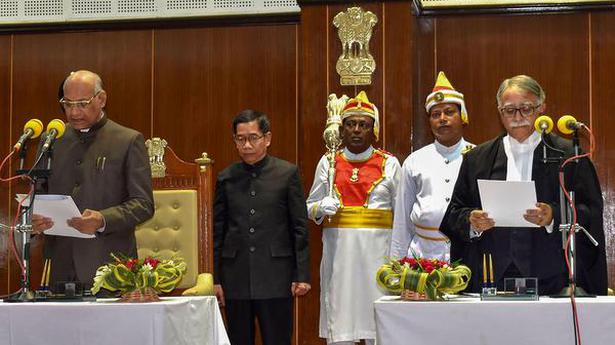 Ramesh Bais, a seven-time MP from Chhattisgarh’s Raipur and former Union minister, was on Monday sworn in as the Governor of Tripura, an official said.

The Chief Justice of Tripura High Court, Justice Sanjay Karol, administered oath of office to Mr. Bais in the presence of Chief Minister Biplab Kumar Deb and senior officials of the administration.

Mr. Bais, 71, who succeeded Kaptan Singh Solanki, was accorded the guard of honour at the lawn of the old Raj Bhavan building here.

Speaking on the occasion, the Governor said that he would work for the all-round development of the State.

The Chief Minister said that he had known Mr. Bais since 1999 and the new Governor’s experiences will be beneficial for the State.

Taking a swipe at the Opposition, Minority Affairs Minister Mukhtar Abbas Naqvi on Saturday said some political parties and “professional provokers” were rubbing salt into the wounds of those affected by the communal riots, but harmony will prevail. Provokers and perpetrators will be in prison and peace and harmony will prevail, the senior BJP leader […]

Municipality plunges into protests over CAA

Almost the all councillors of Palakkad municipality staged dharnas in front of the municipal office here on Thursday in connection with Wednesday’s clashes among them over the presentation of a resolution against the Citizenship (Amendment) Act [CAA]. The protesters were in three blocs. When the ruling BJP councillors protested at the Anjuvilakku junction outside the […]