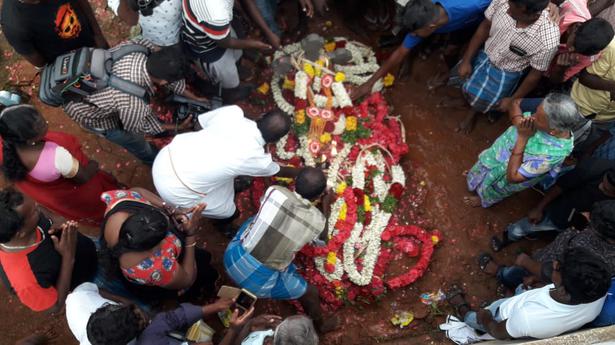 The body of two-year-old Sujith Wilson, which was retrieved from the abandoned borewell at Nadukattupatti early on Tuesday, was laid to rest at the graveyard in nearby Fathima Pudur shortly after 8 a.m.

Following his demise, leaders and politicians from across the country paid tribute to the two-year-old.

Edappadi K. Tamil Nadu Chief Minister Edappadi K. Palaniswami condoled the death of the two-year-old and thanked Ministers and officials who were involved in the rescue. “I extend my deep condolences to Sujith’s parents and relatives,” he said in a statement. It was unfortunate that despite massive rescue operations that went on round-the-clock, the boy could not be saved, the Chief Minister said.

“I’m sorry to hear about the passing of baby Sujith. My condolences to his grieving parents and his family,” Congress leader Rahul Gandhi wrote on Twitter.

I’m sorry to hear about the passing of baby Sujith. My condolences to his grieving parents and his family.

“Sujith who suffered for the last four days and kept the entire country anxious has attained permanent peace. How do we console his parents? Sujith’s loss is not just the family’s loss but the loss of the entire nation. Sujith will always be remembered in our memories,” DMK leader M.K. Stalin said in a tweet.

“It pains me to hear the tragic demise of Sujith. Let his soul rest in peace. My condolences to his family,” said actor and politician Rajinikanth.

“It’s very sad to see the loss of little champ Sujith Wilson.. My heartfelt condolences to his family and his relatives,” said Puducherry Chief Minister V. Narayanasamy in a condolence message.

“All of us were highly hopeful that the child will be rescued alive but to see him recovered as a dead body is disheartening. There are no words to console the parents and family members,” Amma Makkal Munnetra Kazhagam (AMMK) chief T. T. V. Dinakaran tweeted.

Budget 2020 | Economy not a priority for BJP government: Amarinder

Punjab Chief Minister Amarinder Singh on Saturday said the economy was clearly not a priority for the BJP-led Central government, which was too busy pursuing its negative and divisive agenda. “There was nothing in the Union Budget that could pave the way for economic reforms or raise public consumption that was an imperative for reviving […]

Survey of dragonflies hints at impact of floods

Support poured in for Maharashtra Navanirman Sena (MNS) chief Raj Thackeray on Thursday from opposition parties as well as ruling alliance partner Shiv Sena as he was questioned by the Enforcement Directorate (ED) all of Thursday. MNS workers registered their protest against the government action through the hashtag #ISupportRajThackeray on social media. Late on Wednesday, […]