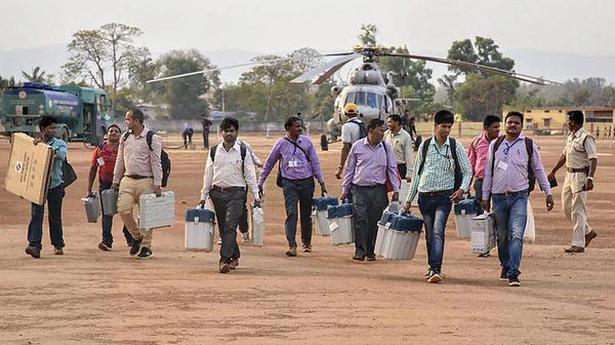 Selling his paddy crop was a pleasantly different experience this year for Yogesh Nareti, a farmer with 17 acres of land in Makadi village in Chhattisgarh’s Kanker district, which goes to the polls this week.

“During the BJP reign, selling the produce at Large-sized Agricultural Multipurpose Cooperative Societies (LAMPS) was tedious. The entire process used to take two months,” he recalls. “Now, besides offering a lucrative MSP [minimum support price], the government has streamlined the procuring process. It takes just a month to receive the payment and you do not come across long queues of farmers outside cooperatives any more.”

He feels three months is too short a period of time to judge the Congress government that took charge in Raipur after 15 years of the BJP. However, he thinks the stark change in the paddy procurement process alone may pay off for the party in the Lok Sabha election. “Certainly, the Congress will get a positive vote,” he said.

If it was the promise of a farm loan waiver that buoyed the Congress to victory in the three State Assembly elections last November, it may be the record rate of paddy procurement that could keep the momentum going for the party in Chhattisgarh in the Lok Sabha election. Having promised an added ₹750/ quintal bonus to the Central minimum support price of ₹1,750 a quintal, the Chhattisgarh government has procured more than 80 lakh tonnes of paddy in this marketing season, an all-time high. Only Punjab has contributed a higher amount of paddy to the Central pool.

“In this marketing season, from November to the end of January, we procured almost 80.4 lakh tonnes of paddy…This is the highest ever. Last year, we only procured 56.88 lakh tonnes and the previous year was 69.6 lakh tonnes,” said Chhattisgarh State Cooperative Marketing Federation managing director P. Anbalagan. “There was a bumper crop this year, but the bonus has also been a key driver in increased procurement.”

In fact, the total paddy requirement for the State public distribution system (PDS) and the Food Corporation of India’s requirement for the Central pool amounts to only 68 lakh tonnes, and the Centre has refused to purchase the additional paddy. As a result, apart from its expenditure for the ₹750/quintal bonus, as well as on the procurement for a State PDS scheme for people not covered by the National Food Security Act, the Chhattisgarh government will also pick up the tab for the extra 12 lakh tonnes being disposed of in the open market.

The party may count the cost worthwhile if it translates into votes. “The Congress has streamlined the system possibly because there is pressure of an impending election. They thought if they could transfer the money in time that would project the party as pro-farmer,” said Alok Shukla, convener, Chhattisgarh Bachao Andolan.

However, he cautioned that only a third of the State’s 33 lakh farmers sell to the government and get the direct benefit of the higher MSP. Also left out of the dual basket of MSP and loan waivers are adivasi communities practising subsistence farming in areas such as Kanker, Sarguja and Bastar, tenant farmers, and those who took loans from private banks or moneylenders, he said.

Mangal Kunjam is a 27-year old Madia tribal who gets 50 quintals of paddy from his 10 acres in Gumiyapal village in the Bastar Lok Sabha constituency, which went to polls in the first phase. “Most tribals are not part of the market economy. We don’t go to cooperatives, which are mostly in cities, to sell our produce. Most of the produce is used for consumption among ourselves,” he said, adding that any loan is only taken from a private moneylender.

Sudesh Tekam is a farmer-leader who believes it is important for all farmers to be stakeholders in both the market and the government, so he has decided to take the electoral plunge himself. “The Congress government is no different from the BJP — one that was ousted by the powerful vote of farmers, labourers and forest dwellers,” said the Independent candidate from Rajnandgaon, a major paddy belt, accusing the Congress of reneging on its promise of an unconditional loan waiver for all.

“The difference between the Congress and the BJP governments is that at least the present one is willing to talk to farmers. The BJP used to threaten us, jail us and didn’t believe in holding talks,” he added.

Jet Airways suspended all its west-bound international flights from India beginning Thursday evening till Friday morning, citing operational issues. The development came on a day when the airline informed the exchanges that it had, further to its letter on April 2, grounded 10 more aircraft. With this, the airline’s fleet is believed to have fallen […]

The Madras High Court has quashed a circular issued by the Commissioner of Prohibition and Excise on March 23, 2010, restraining the members of recreation clubs and their guests from carrying liquor purchased outside clubs and consuming it inside the premises. Allowing a batch of writ petitions filed since 2010 by various clubs in the […]

Foreign Secretary Vijay Gokhale on Monday discussed the situation in Venezuela and Venezuelan oil purchases with U.S. Secretary of State Michael Pompeo during their meeting on Monday, Mr. Pompeo told the press at a briefing. Asked if there was a discussion on India’s oil purchases Mr Pompeo said, “Yeah, so we’re asking the same thing […]