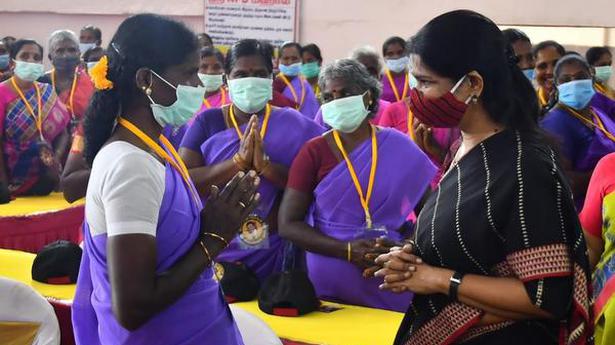 Ms.Kanimozhi launched the second leg of the DMK campaign for Assembly elections ‘Vidiyalai Nokki Stalinin Kural’ (Stalin’s voice for a new dawn) at Konganapuram in Edappadi in Salem district on Sunday.

She told journalists, “They (government) have not learnt any lessons from previous floods. Neither the water channels nor water bodies were desilted or encroachments were removed.” Ms.Kanimozhi said that drop in cyclone intensity saved Chennai, not the government’s measures.

On Chief Minister Edappadi K. Palaniswami’s contention that the AIADMK government has brought huge investments into the State, she said that DMK leader M.K. Stalin has already asked the CM several times to issue a white paper on investements attracted to the State.

Ms. Kanimozhi met with representatives of Self Help Group members here and heard their grievances. She charged, “SHGs have been completely neglected by this government. They have not received any funds and they have suffered severely during the COVID-19 pandemic. Still interest is collected on their loans. I wrote to the Union Finance Minister to waive off their loans. Though I received acknowledgement for receiving the letter, no action has been taken.”

Earlier, speaking at the event, she alleged there is no safety for women under a regime which is being run in the name of a woman (Jayalalithaa). Ms. Kanimozhi charged that justice is not yet been delivered to victims of Pollachi sexual harassment case. She alleged that under this regime, women who have come forward to share their troubles are being attacked.

Ms. Kanimozhi said that educated individuals are being pushed to take up sanitary work. SHGs were formed during Karunanidhi’s regime so that women could gain economic independence.

Women from SHG groups raised their issues at the meeting. The women complained that they haven’t received any funds and they are being neglected due to their alliance to DMK. Few members complained that they haven’t received any skill development training under this government. The members requested steps to waive-off their loans and creation of job opportunities in Konganapuram.

Move in line with vision that aspires to guarantee security for all maritime partners, says MEA Source: thehindu.com Related

20 injured as vehicle topples near Muthathi

A visit to the famous Sri Anjaneya Swamy temple in Muthathi, on the banks of the Cauvery near Malavalli here, turned unfortunate for a group of villagers on Sunday, when the goods-carrier they were in toppled by the side of the road. The victims, all residents of T. Malligere village of Mandya taluk, are recuperating […]

The nine-member expert committee formed to study the reason for deaths due to COVID-19 in the city submitted its report to the State government on Sun Source: thehindu.com Related