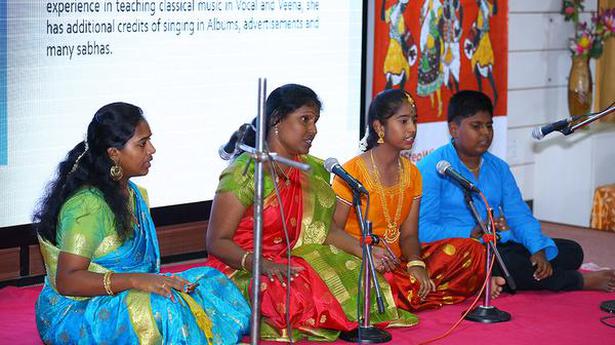 A host of foreign diplomats had a glimpse of the varied facets of Tamil art and culture as young refugees living in the State displayed their talent in Bharatanatyam, Silambam and Veena recital at an event in the city recently.

The Bharatanatyam performance was given by Shofiga, a trained classical dancer from Tiruchi; Silambam by Sanjith Kumar, a bio-technology graduate, also from Tiruchi, and Veena recital by Jaya Dhanusia, a non-camp refugee from Sri Lanka and living in Chennai.

There were also musical and dance performances by young refugees from Namakkal and from Tiruchi.

The occasion was the observance of the World Refugees Day organised by the Chennai office of the United Nations High Commissioner for Refugees (UNHCR) together with Honorary Consular Corps Diplomatique (HCCD), Chennai, and Loyola College on Thursday last, according to a release of the UNHCR.

Those who took part in the event included Ariel Andrade Galindo, Ambassador of El Salvador; Karin Stoll, Consul General of Germany; Michael Coasta, Deputy Consul General of Australia, and Natarajan Sukumar, Consul of Zambia. Among those who were present were representatives from the consulates of US, Russia and Sri Lanka, officials of the State government, members of organisations working in the area of refugees such as Adventist Development and Relief Agency (ADRA), Jesuit Refugee Service (JRS), Lebara and Red Cross and students from the Women’s Christian College, Loyola and the Dwaraka Doss Goverdhan Doss Vaishnav College.

Addressing the event, Karen Uchiyama, wife of the Consul General of Japan Kojiro Uchiyama, shared her experience of having witnessed a refugee exodus and called for an end to the rise of more refugees.

Mohammed Asif Ali, Dewan to the Prince of Arcot, emphasised the importance of tolerance and understanding of different cultures and people which, he said, would lead to world peace.

The India Meteorological Department (IMD) has issued a cyclone alert over the Arabian Sea. A depression prevailing over east-central part of the sea is likely to develop into a deep depression by early Friday morning and a cyclonic storm by midday. Peninsular India is not in the path of the cyclone, however. It is very […]

Anti, pro-CAA protests by different groups of advocates in Hyderabad

A group of advocates staged a protest while another group organised celebrations over the Citizenship Amendment Act (CAA) in front of the Telangana High Court on Wednesday, police said. Raising slogans like “We want Justice”, “Save India and Save Constitution”, some advocates held a protest against the CAA and the National Register of Citizens near […]