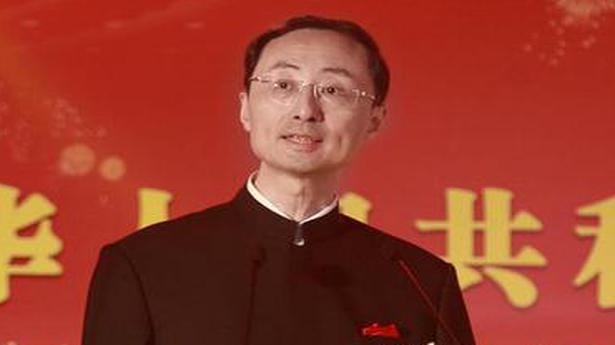 China-India relations assume “global and strategic significance” beyond just the bilateral dimension says Chinese Ambassador to India Sun Weidong, in an interview ahead of Chinese President Xi Jinping’s visit to Mamallapuram this week, where he and Prime Minister Narendra Modi will hold an ‘informal summit’.

(The interview includes written responses to some of the questions posed by The Hindu. The embassy declined to answer specific questions on recent controversies over China’s statement on Jammu and Kashmir, as well as ties with Pakistan)

What were the outcomes of the Wuhan summit between PM Narendra Modi and President Xi Jinping in April last year, and how will the upcoming summit in Mamallapuram build on them?

In April last year, President Xi Jinping had an informal meeting with Prime Minister Narendra Modi in Wuhan. The two leaders had strategic communication on China-India relations and major international issues of shared interest. Putting China-India relations in the global and historical perspective, the two leaders made clear three points: first, China and India should see each other as positive factors in the changing international landscape. Second, the development of China and India is an important opportunity for each other. Third, China and India should view each other’s intentions in a positive, open and inclusive light. The Wuhan Informal Summit is a historic meeting, which pointed out the direction for the development of bilateral relations.

Over the past year, the two sides have actively implemented the important consensus between the two leaders, upgraded and improved the quality of China-India relations, which embarked on the track of sound and stable development. The positive effect of the Wuhan Summit is constantly unfolding. The mutual trust and friendship between the two leaders are being extended to all sectors, localities and peoples of the two countries and translated into tangible achievements. First, maintain close high-level exchanges. President Xi Jinping and Prime Minister Modi have met five times on multilateral occasions and reaffirmed their judgment that China and India are each other’s development opportunities rather than threats. Government departments, political parties, legislatures and military of the two countries have actively engaged in high-level exchanges and shared governance experience. Second, make progress in aligning development strategies. In September this year, the two sides held the 6th Strategic Economic Dialogue and the 9th Financial Dialogue, and reached new consensus on cooperation in policy coordination, infrastructure, energy conservation and environmental protection, high technology, energy and medicine. Third, step up coordination in global governance. China and India are both members of multilateral mechanisms such as China-Russia-India Trilateral, BRICS, SCO and G20, and share common interests in promoting globalization and opposing trade protectionism. On major international issues, China and India have shared interests and similar positions. The two sides have strengthened coordination and cooperation to inject new impetus into the development of bilateral relations.

The two sides are actively preparing for upcoming important high-level exchanges. As the only two major developing countries with a population of over one billion and important representatives of emerging economies, China-India relations transcend the bilateral dimension and assume global and strategic significance. The two sides should strengthen strategic communication, enhance political mutual trust, give full play to the irreplaceable guidance of the two leaders in bilateral relations, and ensure the accurate transmission and solid implementation of the consensus reached by the two leaders.

Specifically, has there been any progress on the boundary question since the Wuhan summit, and do you expect the upcoming summit to make any move towards completing the “second phase” of a “framework settlement”?

I want to point out that it is normal for neighbours to have differences. The key is to properly handle differences and find a solution through dialogue and consultation. Over the past decades, no single bullet has been fired at the China-India border area, and peace and tranquility has been maintained. Boundary question is only part of China-India relations. We need to keep it in the larger picture of China-India relations and do not let the boundary dispute affect the normal development of bilateral relations.

India continues to oppose the Belt and Road Initiative. Are there other alternative ways in which China and India can cooperate on multilateral issues?

The world today is facing major changes unseen in a century. The collective rise of emerging countries represented by China, India and others has changed the structure of international landscape. The world economy is once again at a crossroads, and the rise of protectionism and unilateralism is seriously affecting global stability. The uncertainty of the international situation poses common challenges to both China and India. Strengthening solidarity and cooperation between us is an opportunity for our respective development and the world at large. It will not only benefit one third of the world’s population, but also inject strong impetus into our respective development and add factors of stability and positive energy to international relations.

China and India should strengthen communication and coordination on international and regional affairs. We jointly advocated the Five Principles of Peaceful Coexistence, which have become the basic norms of international relations. We should stick to these principles and bring to a great height of development. At the international level, we should firmly uphold the international system with the United Nations at its core and make the international order more just and equitable. We need to steadily advance reform of the world trade organization, promote South-South cooperation, and adhere to the core values and principles of WTO, promote trade and investment liberalization and facilitation, and build an open world economy that is conducive to the further development of developing countries and emerging markets. At the regional level, we should resolve disputes peacefully through dialogues and consultations and jointly uphold regional peace and stability. We will continue to carry out “China-India plus” cooperation, promote free trade, infrastructure development and regional cooperation initiatives like the BCIM cooperation, harmonise policies and development strategies of all countries, strengthen cooperation in the fields of energy conservation, poverty alleviation, environmental protection and climate change, and achieve common prosperity.

What steps have been taken to address the issue of the $60 billion India-China bilateral trade deficit in China’s favour, and do you think that India will join the RCEP agreement?

With rising uncertainties in the external environment, China and India, as major emerging and developing countries, should uphold free trade and jointly speak out against trade protectionism and unilateralism. The two sides can strengthen cooperation under the WTO framework, jointly safeguard the legitimate rights and interests of developing countries and play their due roles in safeguarding the multilateral trading system and advancing the WTO reforms towards the right direction. Besides, the two sides should work together to promote regional economic integration and speed up negotiations on the Regional Comprehensive Economic Partnership Agreement (RCEP).

China has never pursued a trade surplus, and the trade imbalance between China and India is largely the result of differences in their industrial structures. China has taken active measures to increase imports from India, including lowering tariffs on some Indian imports to China, sending purchasing delegations to India, and assisting in the export of Indian agricultural products and pharmaceuticals to China. Over the past five years, China’s imports from India have increased by 15%. In the first half of this year, India’s trade deficit with China fell by 13.5% year on year, and its agricultural export to China doubled over the same period last year. The box office of Indian films is twice as much in China as in India. These figures have shown China’s efforts and sincerity in addressing the trade imbalance. China welcomes more exports of marketable and competitive Indian products to the Chinese market. We should broaden our vision and take more holistic measures such as increasing mutual investments, encouraging Indian companies to participate in China International Import Expo, upgrading Nathula border trade port to make the pie of cooperation even bigger and gradually reduce trade imbalance in the process of cooperation and development of the two countries.

Several issues persist in the India-China relationship…do you see the convergences growing?

China and India are both ancient civilisations and major developing countries. In history, Chinese paper making, silk, porcelain and tea were brought to India, and Indian singing and dancing, astronomy, architecture and spices were taken to China. Buddhism was introduced into China from India and had a profound impact on Chinese culture. Chinese Admiral Zheng He made seven voyages to the Indian Ocean and reached India six times. This year marks the 70th anniversary of the founding of the People’s Republic of China and the 70th Republic Day of India. Over the past 70 years, China and India have gone through a similar process of economic and social transformation. Today, with the fourth industrial revolution in the making, we still enjoy high complementarity and may explore synergies in our development strategies.

In economy and trade, China has long been India’s largest trading partner and India is China’s largest trading partner in South Asia. Since the beginning of the 21st century, trade between China and India has grown from less than $3 billion to nearly $100 billion, an increase of about 32 times. More than 1,000 Chinese companies have increased their investment in industrial parks, e-commerce and other areas in India, with a total investment of $8 billion and 2,00,000 local jobs created. Chinese mobile phone brands such as Xiaomi, VIVO and OPPO have been well-established in the Indian market. Indian companies are also actively expanding the Chinese market, with a cumulative investment of nearly $1 billion in China. According to Indian statistics, more than two-thirds of Indian companies investing in China are making steady profits. With a combined market of over 2.7 billion people and a GDP of 20% of the world’s total, China and India enjoy huge potential and broad prospects for economic and trade cooperation. China encourages Chinese companies to invest in India and hopes that India will provide a more fair, friendly and convenient business environment for Chinese companies to operate in India.

In people-to-people and cultural field, bilateral exchanges have flourished. We have established and held two rounds of High-level People-to-People and Cultural Exchanges Mechanism, identified the 10 pillars and 8 priorities of people-to-people and cultural cooperation, and opened a new chapter in personnel and cultural exchanges. Practicing yoga, drinking Indian black tea and watching Bollywood movies have become the fashion among Chinese youth. Chinese movie stars such as Jackie Chan are household names in India. People in India enjoy acupuncture, martial arts and Chinese cuisine. The two countries have established 14 pairs of sister cities and provinces, with two-way personnel exchanges exceeding one million. There are 54 flights linking major cities of the two countries every week. More than 20,000 Indian youth are studying in China, and over 2,000 young Chinese are studying in India. Next year, the two sides will jointly hold a series of activities to celebrate the 70th anniversary of the establishment of diplomatic ties, pool more strength of our peoples, promote cultural exchanges and cooperation, and make the tree of China-India friendship take a deep root.

A recently released period movie featuring actor Mammooty has found itself at the centre of a controversy. The Kerala police on Wednesday booked the former director and arguably original scriptwriter of the film, Sajeev Pillai, on the charge of orchestrating a libellous social media campaign to disparage the movie. The Thiruvananthapuram-Rural police have booked Mr. […]

The Supreme Court on August 27, 2019, agreed to consider an urgent plea made by several disqualified Karnataka MLAs for an early hearing of their petitions challenging their ouster from the State Assembly by former Speaker Ramesh Kumar under the anti-defection law. The petitions were orally mentioned before a Bench led by Justice N.V. Ramana […]

‘Jaishankar one of the world’s best diplomats’: US experts

Some of the former top U.S. diplomats and foreign policy experts have hailed the appointment of S Jaishankar as the new External Affairs Minister and have exuded confidence that U.S.-India strategic ties will be further enhanced under his watch.   Mr. Jaishankar, 64, known for his skillful diplomacy, tough negotiating tactics and strategic vision, had […]