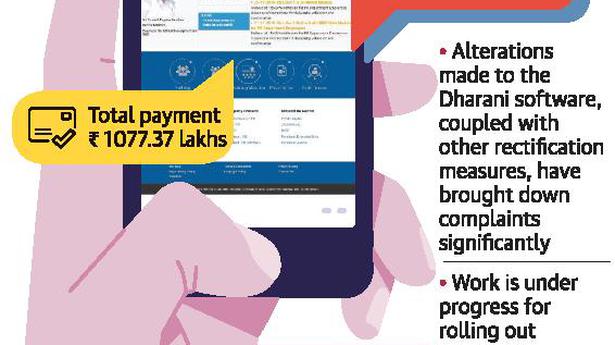 Registration and mutation of land transactions of agricultural lands through Dharani, the integrated land record management system portal, are stabilizing fast even as uncertainty continues on the launch of operations for non-agricultural properties.

After initial hiccups on day one, transactions on Dharani portal have registered impressive increase over the next four days. As against 470 registrations on the first day which saw technical problems like servers not responding in time, the number of registrations reached 1,472 on November 6 with the government receiving payments to the tune of ₹10.77 crore.

The number of hits to the portal enhanced significantly reaching 63.63 lakh and as many as 38,132 persons signed up to the portal. Following a series of complaints, the IT department took up rectification measures altering the configuration of the software allowing 5,000 users to log on simultaneously.

Alterations made to the software, coupled with other rectification measures like utilization of secondary broadband connection, brought down the complaints significantly and the department is now gearing up to roll out additional services and modules like mortgage deeds, module for banks and non-agricultural land assessment tax.

On the flip side, concerns continue over the scope for irregularities in the new system which was launched without updating the existing land records fully. Substantiating these concerns was the incident in Nalgonda where a woman was arrested after she registered a land which was already sold to other party last year in the name of her daughter in Dharani portal. The woman was subsequently arrested and three Revenue officials who colluded with her were suspended.

Questions are being raised over the government’s action in asking the property owners to upload the data on a public website on the ground that the exercise is not supported by any law or regulations. Moreover, the reported operation of more than one website in the same name has become a cause of concern for many as this could result in uploading confidential data on wrong website.

A 10-year-plan to remodel the 1,000-pillar hall at the Meenakshi Sundareswarar temple in Madurai is finally in motion. Joint Commissioner of the temple N. Natarajan said that they have begun encasing wooden paintings said to be over 100 years old, depicting the Tiruvilayadal of Lord Siva to avoid vandalism. They will also be working on […]

The National Investigation Agency (NIA) raided houses of two person in Kasaragod on Sunday in connection with their suspected links with the Islamic State (IS) and jihadi terrorists involved in the Sri Lanka Easter Sunday bombings. Police sources said that the residences of Ahamed Arafat at Kaliyangad and Aboobacker Siddique at Nayanmarmoola in Kasaragod were […]