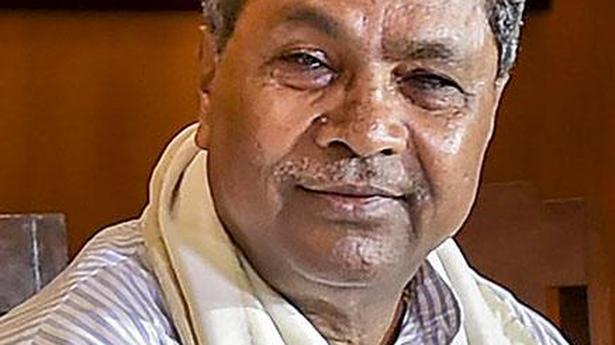 Criticising the BJP for trying to remove lessons on Tipu Sultan from school textbooks, former Chief Minister Siddaramaiah has said that doing so would be nothing but twisting reality and history.

Addressing presspersons in Jamkhandi on Wednesday, he asked the BJP to clarify whether they believe that Tipu fought against the British or not. Asserting that schoolchildren have the right to know about history, he said no efforts should be made to remove Tipu from books. Taking exception to the statement of BJP leaders who call Tipu a fanatic, he remarked that: “Since the BJP is fanatic, they call others the same.”

Karnataka Pradesh Congress Committee president Dinesh Gundu Rao said Tipu was known world-over and he had granted land and financial support to temples during his rule.

Mr. Gundu Rao said Tipu had protected Sringeri Shankaracharya Mutt during the invasion of the Marathas and generously donated land and funds to temples. Noting that only people having no knowledge of Tipu were speaking ill about the ruler, Mr. Gundu Rao said the move to remove the lessons would not go well with scholars of history. Former president and scientist Abdul Kalam had praised the achievements of Tipu Sultan for his knowledge in missile technology but the BJP government wanted to delete lessons from history books. Cinemas, television serials and textbooks written on life and achievements of Tipu Sultan, the Congress leader added.

Rewriting history from the BJP’s point of view was not good, he said. He also reminded the BJP leaders about communal riots that occurred in 2002 in Gujarat and opposed saffronisation of education. Instead of thinking about removing Tipu from textbooks, the BJP should focus on reviving economy, providing jobs and relief to the flood affected people, the KPCC chief said.

Meanwhile, replying to Mr. Yediyurappa’s statement that Mr. Siddaramaiah would always remain Leader of the Opposition, the latter asked whether the former can predict the future. ” Is he learning any course that helps him predict future”, he asked.

DMK president M K Stalin on Friday welcomed the Supreme Court verdict permitting the State to hold elections to rural local bodies in 27 districts excluding the nine reconstituted districts, where the delimitation process has not been completed. But he maintained that conducting polls in other districts would lead to confusion. “The judgement is historic, […]

Govt. to go for reverse tendering for Happy Nest project

The State government has decided to go for reverse tendering with regard to Amaravati Happy Nest project. The government on Monday issued orders (GO.MS.No. 2965) approving the proposal of the AP Capital Region Development Authority (AP CRDA) to “adopt modalities to be implemented on tender-cum-reverse auctioning process or reverse tendering process.” The orders are subject […]