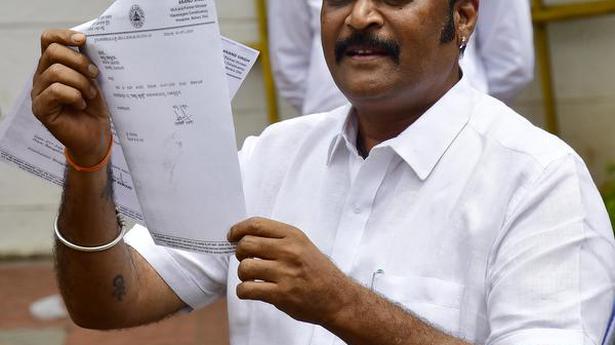 Politics in Karnataka has touched a new low with sections of legislators of the two-party governing combine — the Congress and the Janata Dal (Secular) — stooping to arm-twisting and blackmailing to enjoy positions of power, apparently prompted by the Bharatiya Janata Party (BJP), which is seeking to woo them to get to the seat of power.

The H.D. Kumaraswamy-led coalition government is in serious trouble, with a section of legislators of the Congress and the JD(S) submitting their resignation from the membership of the Legislative Assembly. Akin to one-day cricket matches, the last ball in this political match between the coalition government, which is seeking to hold on to its ground, and the BJP, which is working behind to dislodge it, is yet to be bowled.

If the BJP believes it can pull down the government at ease, it is highly unlikely that it can do so given the fact that the Congress and the JD(S) will do their best to retain power. That the Congress high command has little control over the legislators is quite evident, with several partymen emerging as power centres and calling the shots. But then they can all be tamed depending on the manner in which Speaker of the Legislative Assembly K.R. Ramesh Kumar uses his discretionary powers.

As such, although 11 legislators have resigned, the Speaker has made it clear that he will find time to look into the matter only a few days later since he is preoccupied with other issues. The same group of legislators has also called on Governor Vajubhai R. Vala and sought a floor test although he cannot issue such a direction at the present juncture since a session of the legislature has already been summoned.

It should be noted that at least 15 legislators of the Congress and the JD(S) should resign from the membership of the Assembly to enable the BJP, which has a strength of 105 legislators in the 224-member Assembly, gain a majority. The resignation of such a large number of legislators is likely since the BJP is believed to be promising them a whole lot of goodies. The former Minister and senior Congress leader of the State H.K. Patil stands out at this juncture since, although unhappy with the state of politics, he has stood loyal to the Congress and no BJP leader has ventured any attempt to lure him.

If Anand Singh, representing the Vijayanagar constituency, Ramesh Jarkiholi of the Gokak constituency apart from A.H.Vishwanath of the JD (S) have caused much embarrassment to the Congress and the JD(S) by voicing their dissent and bringing together like-minded legislators to submit their resignation to the Speaker, much more embarrassment is on the cards for the governing parties when the investigation into the IMA investment scam takes a new turn and political leaders are called in for interrogation. It all depends on the extradition of the kingpin of the scam, Mohammed Mansoor Khan and towards this end, the Union government is expected to call the shots.

The Chief Minister, who is on a private tour of the United States of America, will return to Bengaluru in time for the Legislature session. Nothing much can be expected at the session in terms of serving the interests of the State and the people and all that will play out will be the political animosity within the Congress, between the two coalition partners and between the governing combine and the BJP. Given the nature of the political developments and the attempts to dislodge the coalition government, it will only be natural that the interests of the people Karnataka will take a back seat.

(The writer is Senior Fellow, The Hindu Centre for Politics and Public Policy)

A 31-year-old Chinese national, who was placed under isolation at Naidu Hospital in Pune for suspected exposure to novel coronavirus (COVID-19), left a handwritten message thanking doctors and nurses for their good work. He was isolated after he vomited mid-air in a Air India flight. While he tested negative, he was discharged on February 11, […]