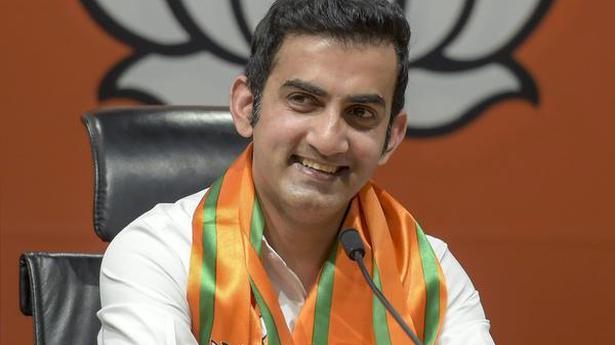 Delhi Police on Saturday booked cricketer-turned-politician Gautam Gambhir under the Delhi Police Act for holding a public rally without permission on April 25.

Mr. Gambhir held a rally in Delhi’s Jangpura on April 25 after which Election Commission of India directed the RO to approach the police.

“Photographs of the event were also given after which he was booked under 28/112 Delhi Police Act,” Mr. Srivastava said.

Reacting to the direction, Aam Admi Party candidate Atishi tweeted, “First, Discrepancies in nomination papers. Then, Criminal offence of having 2 voter IDs. Now, FIR for illegal rally. My question to @GautamGambhir: When you don’t know the rules, why play the game?”

All efforts would be made to encourage the sale of products manufactured by women in the Self Help Groups under the Mission for Elimination of Poverty in Municipal Areas (MEPMA) and interest-free loans would be given to all SHGs, said Anantapur Urban MLA Anantha Venkatarami Reddy, while formally inaugurating the MEPMA Bazaar here on Thursday. […]

Tension continues to prevail outside TSRTC bus depots across the State on Tuesday after the employees, who called off their 52-day old strike, had tried to rejoin duties. Police detained scores of employees, who tried to prevent buses run by temporary drivers from coming out of the depots. As they were prevented from rejoining duties, […]

The implementation of the National Tobacco Control Programme (NTCP) is expected to become more stringent in Mysuru in the coming days with the authorities fixing a target for Panchayat Development Officers (PDO) and Mysuru City Corporation (MCC) health inspectors to book cases under the Cigarette and Other Tobacco Products Act (COTPA). A district-level meeting of […]