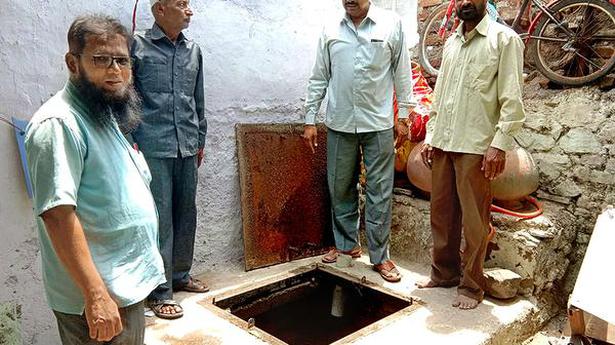 Fetching water from a public tap close to her house in Sakaf Roza area in Ward 28 in Vijayapura, Megha Kapse (43) recalls a decade-old situation when she had to wait at least 10 to receive municipal water.

But in 2009, the situation changed for about 2,000 houses of the area when they started receiving water almost everyday, even when several wards in the city are facing drinking water problem even today.

“Since 2009 we have not faced any water crisis even during harsh summers in last 10 years. I think it is the only ward of the city which gets water everyday despite having no 24 x 7 water connection from the government,” she said.

The source of this perennial water is two ancient open wells, which were till decade ago filled with filth and garbage.

Back then, Kaisar Inamdar, along with local residents of Ward 28, took the lead to revive the almost closed open well. He decided to clean the open well to see if he could revive it for drawing water.

“Since both wells are located on private property, convincing the owners was a little difficult task as they were not ready to allow the wells to be cleaned. Finally, we urged them to allow us to clean the wells,” Mr. Inamdar said.

Cleaning proved to be bigger challenge as one of the two wells was filled with filthy mud and garbage. On top of it, the well is located inside a narrow lane which was preventing the entry of any machine.

“Therefore, we had no choice but to enter the well manually. Since the well is narrow, only two persons could enter it. It took at least three months to remove the filthy water from the well, and also, let fresh water to start collecting in it again,” he said.

After cleaning the first well, it did not take long to clean the second well, as it did not have too much waste.

When both wells were cleaned, the matter was brought to the notice of the municipal authorities who later agreed to install submersible pumpsets and lay pipelines in the ward to supply water to houses from the wells.

After laying pipelines, the two wells were used to supply water to nearly 2,000 houses everyday twice through nearly 500 public taps. “It has been about a decade now and these two wells have never gone dry. They have been supplying water uninterruptedly till today,” Mr. Inamdar said.

He said that Ward 28 alone has at least a dozen such ancient wells, and if they all of them are revived, they can supply water to at least three more wards of the city.

“The city has hundreds of such open wells. The government, instead of spending crores of rupees on bigger projects, can help revive these ancient wells to resolve drinking water problem of the city,” he said.

Ahead of the second phase of voting on Thursday, Congress president Rahul Gandhi said Prime Minister Narendra Modi now only talks about “national security” because he “stands exposed as a politician full of lies and false promises”. He emphasised that “the real and biggest national security issue is unemployment”. In a wide-ranging interview with The […]

A delegation of Congress leaders called on former MP C.H. Vijayshankar at the latter’s residence in Mysuru and urged to reconsider his move to return to the BJP fold. The delegation led by former MP R Dhruvanarayan met Mr Vijayshankar on Sunday and sought to remind him that the Congress party had fielded him as […]