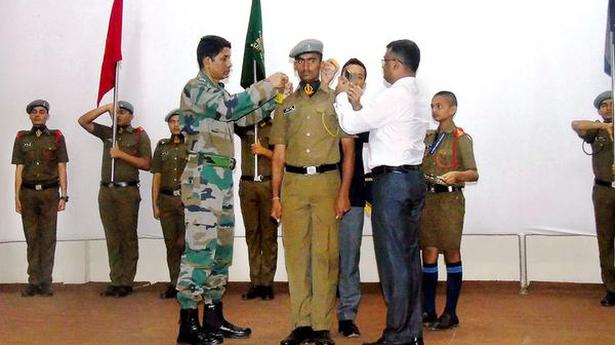 The investiture ceremony of the new batch of prefects was held in the Rashtriya Military School in Belagavi on Friday.

Inspector-General of Police (Northern Range) Raghavendra Suhas spoke to students and urged them to prepare for a career in the Armed forces.

“I see the sparkle of eagerness in your eyes to join the Armed Forces. Apart from preparing for entrance examinations to defence institutions, cadets should also focus on personality development and imbibe traits like sincerity, obedience to duty, good communication skills and patriotism. These would turn you into good officers and good human beings,” he said.

He felt that the defence forces should prefer the students of Military and Sainik schools over others during the selection of candidates to the National Defence Academy.

Spectator gored to death during jallikattu in Ariyalur district

A spectator was gored to death by a bull during a jallikattu event at Kokkudi in Ariyalur district on Sunday. The bull attacked Bojiran, 25, of Lalgudi, near the enclosure while he was watching the event. Volunteers rushed him to a temporary medical camp in the village to administer first aid. Since the injury in […]

The panel was set up by Chief Minister Y.S. Jagan Mohan Reddy to find out the causes of the incident that claimed at least 12 lives and hospitalised about 500 people on May 7. Source: thehindu.com Related