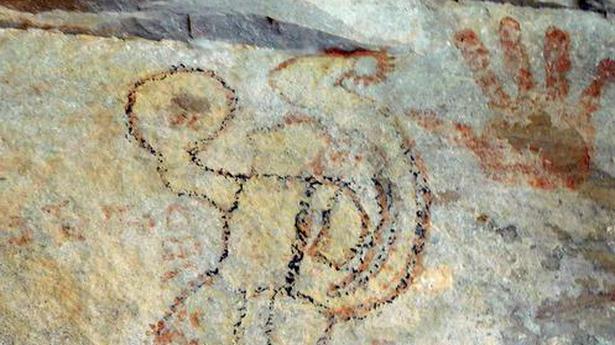 A team of five researchers from Yogi Vemana University (YVU), Kadapa, have discovered caves rich in rock art. The caves are located about four km from the Bhogeswaram temple complex in the Kundu River valley in Kurnool district of Andhra Pradesh.

According to V. Ramabrahmam, who led the team, the rock art belongs to the period between 6000 BC and 6th century AD. “We have rock art of Mesolithic, Neolithic, and Megalithic periods, as well as paintings from the historic period.”

About the Mesolithic art, he says four or five hand impressions of a single person with red ochre have been noticed. Similar impressions have also been found at different rock art sites in Rayalaseema.

“The handprints were made by dipping the palm in colour and slapping it on the wall of the rock shelter,” says the researcher. Mesolithic tools have also been found, indicating that people of the prehistoric period lived at the place.

On the Megalithic age, he says there is a human figure in white pigment. “The painting depicted a human in combat with a wild animal that resembles a tiger. We also noticed a painting of two humans standing with tridents in their left hands. This shows the usage of iron weapons, the basic feature of the Megalithic communities.”

Besides the prehistoric rock art, there are others depicting Rama, Hanuman and Ravana. “Rama holds a bow in his left hand with his face painted with yellow ochre. Ravana painting is also in yellow ochre, and he is seen kneeling. Hanuman is seen lifting a mountain while standing,” says Dr. Ramabharhmam.

The research team also found five burials nearby. “Out of the five, three are intact,” he says.

Others in the team are assistant professor Y. Raghu and Ph.D scholars C. Shiva Kumar, J. Narayana, and P. Nagesh. The team has appealed to the Archaeological Survey of India to preserve the rock art for future generations.

Meghalaya-based insurgent group Hynniewtrep National Liberation Council (HNLC) has been banned by the Central government for its increased activities of violence and other subversive acts. In a notification, the Ministry of Home Affairs (MHA) said the HNLC, along with all its factions, wings and frontal organisations, has been openly declaring as its objective the secession […]

The students will be given at least 10-days notice before exams are conducted Source: thehindu.com Related

BJP calls no-confidence a friendly contest between UDF and LDF

BJP State president K. Surendran said Leader of the Opposition Ramesh Chennithala could not elicit a straight answer from the Chief Minister on any issue. Source: thehindu.com Related