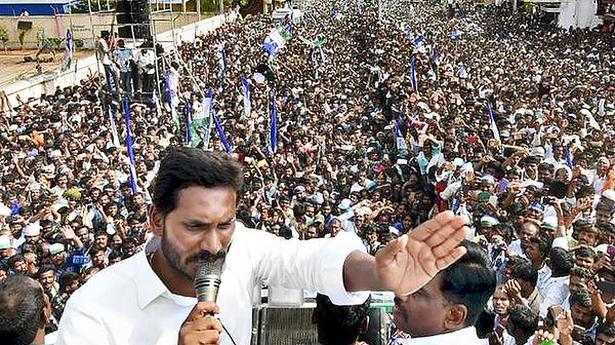 The YSRCP, immediately on coming to power, will bring the Andhra Pradesh State Road Transport Corporation (APSRTC) under the direct control of the government, according to its president Y.S. Jagan Mohan Reddy.

Addressing public meetings at Madakasira and Somandepalli in the district on Saturday, Mr. Jagan Mohan Reddy promised to take better care of the RTC employees and workers.

Hitting out at Chief Minister N. Chandrababu Naidu for failing to complete the 20% work remaining on the distributary canals in the Madakasira region for supplying irrigation water from HNSS, he said ₹280 crore was spent and 80% work completed by 2014 itself.

“Farmers have been cheated by not supplying them irrigation water despite a promise made by Mr. Naidu in 2015,” Mr. Jagan Mohan Reddy said. Water could have been brought directly from PABR, he added.

Seeking to remind people of the initiative taken by former Chief Minister Y.S. Rajasekhara Reddy in constructing the Gollapalli Reservoir for storing the Krishna waters brought through the HNSS network, he said 11,000 acres were acquired then and 80% work completed. In the last five years, the TDP government could not bring even drinking water to the Gorantla mandal in Penukonda constituency, he said.

People’s representatives from TDP made money by illegally mining sand from the Penna, Jayamangali and the Chitravathi, but did not take interest in bringing water to the villages, he alleged.

L&T company was given contract for levelling land that was already flat for the establishment of KIA Motors, he alleged, and said that contractors owing their allegiance to the TDP were given sub-contracts for the ₹177-crore project.

Staff Reporter in Kurnool writes: Addressing a public meeting at Nandikotkur in the district, Mr. Jagan Mohan Reddy said his party, on coming to power, would appoint one volunteer for every 50 houses in villages to ensure efficient delivery of government schemes. Beneficiaries need not bribe anyone to avail of welfare schemes, he added.

Instead of fulfilling his promise of providing jobs, Mr. Naidu drove many out of employment, Mr. Jagan Mohan Reddy alleged, and promised to generate 2.30 lakh jobs if voted to power. Industries would be encouraged to give 70% jobs to local youth, he said.

Accusing Mr. Naidu of stalling industrialisation of the region, Mr. Jagan Mohan Reddy said it was Prime Minister Narendra Modi’s effort that ensured establishment of the lone industry in the district – KIA Motors. Mr. Naidu was unjustly claiming credit for it, he added.

Referring to the Mucchumarri irrigation project that envisaged water for the second crop as well, he said the TDP government failed to supply water even for the first crop. More than 80% work on the project was completed before the TDP came to power, and the ruling party could not complete the remaining work, he alleged. Farmers too lost heavily under the TDP rule, he said.

The Gopalakrishnan-Deshpande Centre for Innovation and Entrepreneurship of the Indian Institute of Technology-Madras and the Confederation of Indian Industry-Sohrabji Green Business Centre signed an agreement to promote startups that venture into cleantech space. R. Raghuttama Rao, Chief Executive Officer, GDC, said: “Start-ups in the cleantech and green businesses form 20-25% of the disruptive ideas emanating […]

The Supreme Court on Friday agreed to hear on March 2 the plea of complainant law student that the rape case against former Union Minister Swami Chinmayanand be transferred to a Delhi court from Uttar Pradesh. A Bench headed by Chief Justice S.A. Bobde was told by senior advocate Collin Gonsalves, appearing for the complainant […]