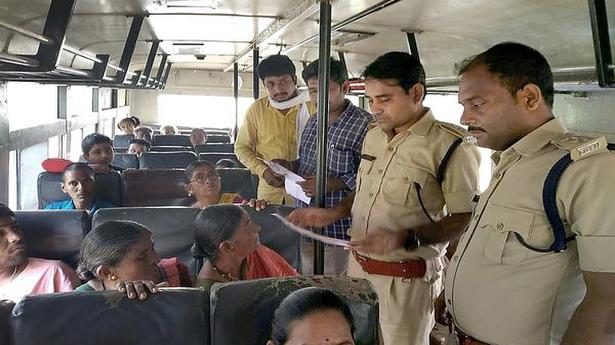 Workers and employees of TSRTC Adilabad Region on Saturday staged silent protests by displaying black badges. They took out a rally from Sundarayya Bhavan to Telangana Chowk via RTC bus depot in Adilabad town and staged a silent demonstration for about 30 minutes.

Meanwhile, RTA officials conducted checks in buses and interacted with passengers to ascertain whether extra fare is being charged by conductors. They made travellers aware of the fare chart that is being displayed in every bus.

In Medak district headquarters, the employees held sarvamata prardhanas at all religious places.

In Nizamabad, the Human Rights Forum (HRF) extended its wholehearted support to the striking TSRTC workers who are demanding incorporation of the transport corporation with the government, besides other demands.

“Education, healthcare and public transport are the sovereign functions of the State. People cannot be inert. They have to move from one place to the other in persuasion of their daily chores. It is their right to movement, a human right, part and parcel of the right to life, and thus a constitutional right”, said Gorrepati Madhava Rao, HRF State president.

In a statement, here on Saturday, he said that efficacy of public transport organisation should not and couldn’t be measured on the basis of profit it earns. However, as far as the RTC is concerned, the polices of the government are to be blamed for the losses, he said. The government didn’t clear arrears due to RTC periodically. There were large sums of arrears to be cleared and they are in thousands of crores of rupees.

The government didn’t permit the RTC to increase bus fares on par with the fuel price escalation and it was lethargic or mere spectator, on occasions facilitator to the private operators to run the contract carriages as stage carriages. Such acts adversely affect the profit-making capacity of the RTC and therefore the government should take over the TSRTC and run it as one of its departments, he said.

Mr. Rao said that as long as the government does not find a solution to the strike, it will continue to infringe the people’s right to movement. Therefore, the Chief Minister should keep aside his ego and call the representatives of trade unions for talks to find a solution, he added.

Meanwhile in Karimnagar, expressing solidarity with the striking TSRTC employees, the Lok Satta launched as post-card campaign addressed to Chief Minister K Chandrasekhar Rao, opposing the State government move to privatise the corporation. At a programme organised here on Friday, Lok Satta district president N Srinivas launched the campaign. opposing the privatisation of state-owned RTC. Stating that public transportation is a must for the benefit of common man, he said the government should provide its pending dues to bail out RTC from losses. He also said that the government should announce sops to the RTC — such as — removal of registration tax, and no tax on diesel. On the occasion, concerned citizens wrote 100 letters to the CM office. Lok Satta district secretary Prakash Holla, KS Narayana, Chandra Prabhakar, M Gangadhar, Nagamohan, Kondal Rao and others were also present.

A covert cyber surveillance and infiltration operation initiated by the Kerala police with the help of the Interpol in January to crack down on child pornography culminated on Monday with the arrest of 20 persons from different parts of the State, according to top officials. Additional Director General of Police, South-Zone, Manoj Abraham, who heads […]

Defence Minister Rajnath Singh on Friday said over 200 Memorandums of Understanding (MoU) have been signed so far at the DefExpo in Lucknow, asserting that the country is on its way to achieve the target of USD 5 billion in defence exports by 2024. Addressing an event at DefExpo-2020, he said the Centre’s policy for […]