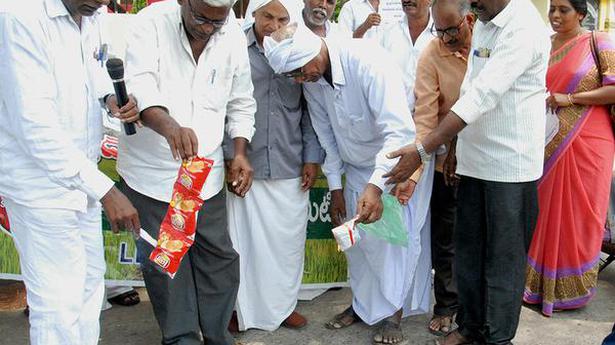 Activists of the All India Kisan Sabha (AIKS) staged a demonstration here on Tuesday in protest against PepsiCo suing farmers from Gujarat for growing a potato variety used to make its branded chips.

The activists led by AIKS district secretary P.Venkat Rao and district president P.Hanumantha Rao came in a procession to the Collectorate shouting slogans against the multinational company for drawing to court the farmers from Gujarat for growing a potato variety used in its branded chips allegedly in violation of the provisions of the Protection of Plant Varieties and Farmers’ Rights Act. They set on fire some chips packets to register their protest.

AIKS-led Kavulu Rythula Sangham secretary V.Balakotaiah said 195 farmers’ organisations across the country would intensify their stir if the firm did not withdraw the case forthwith.

The Centre should intervene to protect the traditional rights of farmers and take immediate steps to prevent exploitation of ryots on the pretext of contract farming, Centre of Indian Trade Unions (CITU) district secretary Ch.Srinivasa Rao said.

Eviction of traders in Munnar upheld

The street vendors of Munnar, who were evicted by the Revenue authorities, cannot claim any protection under the Street Vendors (Protection of Livelihood and Regulation of Street Vending Act, 2014) Act as the area under the Munnar grama panchayat will not come under the ambit of the Act, according to the Kerala High Court. The […]