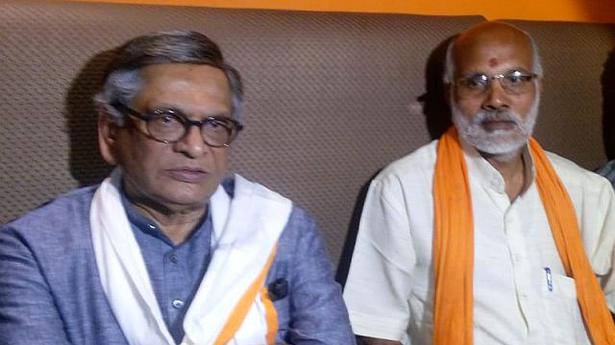 The constitution has given the people the rights express their opinions. “There is no compromise on the the rights guaranteed. Nobody should be called anti-national for criticising Modi. Even Modi will not approve this”, he said.

”Modi is a giant, will return to power’

Mr. Krishna said that there was no doubt in Narendra Modi returning to power after the polls.

“Narendra Modi is a giant and partners in the so-called Mahaghatabandhan are like pygmies”, he told press persons, here on Friday.

Mr. Krishna said considering the personality and achievements of Mr. Modi, he is a giant. The partners in the Mahaghatbandhan are just like pygmies. “Both can’t be compared”, he said.

He also remarked the alliance of some parties was not even a ghatbandhan, forget being mahaghatabandhan. “In Uttar Pradesh, the two parties have sidelined the Congress by offering it two seats. Similarly, in some states there are Congress-free alliances. The isolation of the Congress has begun in the country”, he said.

Regarding AICC president Rahul Gandhi’s contest in Wayanad in Kerala, Mr. Krishna said any individual who has crossed 25 years of age has the right to fight in any constituency in the country. “One can guess that he has gone to Kerala fearing defeat in Amethi. Smrithi Irani has become stronger in the constituency”, he said.

Asked if he would campaign in Mandya, Krishna said he would be campaigning in seats where the BJP has fielded its candidate. “The party will take a decision on this issue”, he said.

Mr. Krishna is in Hassan to campaign for BJP candidate A. Manju.

‘AIADMK should have made a clear decision on Triple Talaq Bill’

The AIADMK should not have walked out of the Rajya Sabha during the vote on the Triple Talaq Bill and should have supported it. The party should have taken a decision on it and stuck to it, BJP State president Tamilisai Soundararajan said on Sunday. In an interview with The Hindu, Ms. Tamilisai said, “As […]

Evacuees returning to their homes in Kodagu, Mysuru

Evacuees have started returning to their respective villages in Kodagu and Mysuru districts, though in small numbers, to check out the condition of their flooded homes and properties after over a week of staying in relief centres. As many as 8,000 people have taken shelter in about 45 relief centres across Kodagu since the deluge. […]