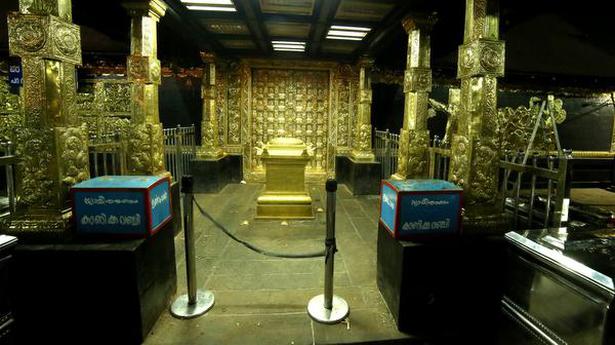 A nine-judge Constitution Bench of the Supreme Court on Monday upheld the decision of the Sabarimala Review Bench to refer to a larger Bench questions on the ambit and scope of religious freedom practised by multiple faiths across the country.

The nine-judge Bench, led by Chief Justice of India S.A. Bobde, said a Bench engaged in the review of a particular judgment could indeed refer other questions of law to a larger Bench. Arguments on merits would be heard from February 17.

The Bench also framed seven questions of law which the nine-judge Bench would decide now. These are:

On the last day of hearing, the Chief Justice had defended the November 14, 2019, reference made by a five-judge Sabarimala Review Bench led by then Chief Justice Ranjan Gogoi.

“By making this reference order (on November 14), the Bench (led by Justice Gogoi) has not prejudicially affected anybody’s rights. It may be the most innovative idea, but it has not affected any rights,” Chief Justice Bobde had said orally.

On November 14 last year, the Gogoi Bench, in a majority judgment, did not decide the Sabarimala review cases before it. Instead, it went on to frame “larger issues” concerning essential religious practices of various religions. It further clubbed other pending cases on subjects as varied as female genital mutilation among Dawoodi Bohras to entry of Parsi women who married inter-faith into the fire temple and Muslim women into mosques and referred them all to a larger Bench. The reference order also asks the larger Bench to consider the Rule pertaining to the prohibition of entry to women of menstruating age into the Sabarimala temple. Chief Justice Bobde, who succeeded Justice Gogoi as top judge, set up a nine-judge Bench to hear the reference.

The November 2019 reference had hit a bump on Monday last when senior advocate Fali Nariman had objected to it. He had argued the court could not declare law in thin air.

“Fundamental (to judicial process) is you apply law to the facts of cases and not decide the law before looking into the facts… Never indulge in the exposition of law outside the realm of the facts of the case,” Mr. Nariman had argued.

He had said the Gogoi Bench’s sole task was to review the Sabarimala judgment of September 2018. The major ground for seeking a review was the finding in the judgment that Ayyappa devotees did not form a separate religious denomination. On November 14, the Review Bench had recorded no errors apparent or miscarriage of justice in the 2018 verdict.

“When Ayyappa devotees was not found to be a separate denomination, then these reference questions on Article 25 (religious freedom) are purely an academic exercise. It was not necessary to raise these hypothetical questions in reference. The President, and not the CJI, consults the Supreme Court under Article 143 of the Constitution on questions of law and facts,” Mr. Nariman had argued.

Senior advocate Shyam Divan had agreed that review jurisdiction did not include “framing a catalogue of questions randomly”.

“But what if judges have a doubt? They refer it to a larger Bench. Are you saying the President can refer questions of law to the Supreme Court, but judges cannot?” senior advocate A.M. Singhvi had countered.

Senior advocate K. Parasaran had said the Supreme Court, as the highest court of the land, had unlimited jurisdiction. The fact that it was reviewing Sabarimala judgment does not preclude it from referring other questions of law and cases with similar issues to a larger Bench.

Solicitor General Tushar Mehta had contended that the objections raised against the November 14 reference to a larger Bench were based on “inherently faulty premise”.

“To say that a Review Bench cannot refer questions of law to larger Bench is absolutely absurd… No technical fetter prevents the Supreme Court from doing complete justice,” Mr. Mehta had said.

The Kerala government had also objected to the reference, saying the Gogoi Bench could not have kept the Sabarimala review pending until nine-judge Bench had finished examining questions referred to it.

The government had voiced apprehensions about the possibility of the Sabarimala case being re-opened if the nine-judge Bench ended up declaring a new law in the future.

Such a turn of events may even lead to the upending of the September 28, 2018 majority judgment of a Constitution Bench, which had declared the prohibition on entry of women aged between 10 and 50 years of age as unconstitutional and discriminatory.

Sushma Swaraj was a champion for women in India and across the globe: Ivanka Trump

Condoling the demise of Sushma Swaraj, senior advisor to U.S. President Donald Trump and his daughter Ivanka Trump said the former external affairs minister was a champion of women in India and across the globe. Swaraj, 67, passed away at the All India Institute of Medical Sciences in New Delhi on Tuesday night after suffering […]

India has voiced concern over the UN’s inability to pay reimbursements for peacekeeping operations conducted by the country and other Troop Contributing Countries and said that the Secretary-General contributed to a “false sense” of financial soundness by using closed peacekeeping funds to pay staff salaries. The UN is facing a “severe liquidity crisis”, reaching its […]

A team of Bihar anti-terrorist squad (ATS), aided by the Pune ATS, has arrested a Bangladeshi national alleged to be a terror suspect from Pune’s Chakan industrial area in connection with the Pulwama terror strike last month. According to sources, the man, identified as one Shariat Mandal, is believed to be an associate of the […]