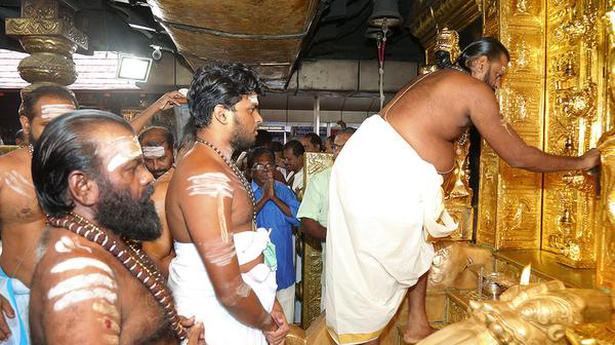 The Lord Ayyappa Temple at Sabarimala was opened on Saturday for the annual Chithira Aattathirunal festival to be celebrated on Sunday.

The head priest (melsanthi) opened the sanctum sanctorum in the presence of the chief priest (tantri) at 5 p.m. and it was kept open till 10 p.m. facilitating holy darshan.

The ghee brought from the Kowdiar Palace in Thiruvananthapuram will be offered to the presiding deity for the Neyyabhishekom ritual. The kalabhapuja will be performed at the Namaskara Mandapam in the forenoon.

The specially-prepared sandal paste (kalabahom) will be taken out in a procession to the sanctum sanctorum prior to the Utchapuja for pouring it over the Ayyappa idol as part of the Kalabhabhishekom.

The sandal paste offered to the deity will be distributed as prasadom to the devotees, later.

A large number of devotees are camping at the holy hillock to witness the rituals. The temple will be closed after the Athazhapuja on Sunday evening.

Odisha records highest spike with 20 cases in one day

The total number of COVID-19 cases in Odisha climbed to 142 on Thursday. The State saw the largest spike with 20 cases – 17 from Jajpur and three from Source: thehindu.com Related

Gujarat is under attack from hoppers — new-born locusts — that have flown in across the international border. As the swarms mature, they have ravaged farms in North Gujarat, devastating farmers in the three border districts Banaskantha, Patan and Kutch. Read the full article here. Source: thehindu.com Related