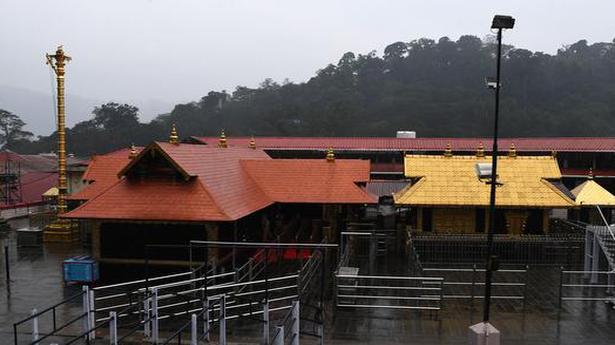 Political parties, right wing outfits and devotees in Kerala are keeping their fingers crossed as the Supreme Court is set to pronounce on Thursday its verdict on pleas seeking review of its decision to allow entry of women of all age groups in the Sabarimala Temple.

The southern state had witnessed high drama and protests by devotees and right wing activists last year against the CPI(M)-led LDF government’s decision to implement the top court’s order.

Sixty-five petitions had challenged the authority of the apex court to intervene in a “centuries old” belief that the Sabarimala deity is a Naishtika Brahmachari whose penance should not be disturbed by the entry of women worshippers of the menstruating age of 10 to 50 years.

The review petitioners have argued that the 1955 notification was protected by the freedom of religion enshrined in the Constitution.

The review petitioners have argued that the principle behind the notifications was to restrict entry of women who fall under a “procreative age group”.

The chief priest of the temple and the devotees are entitled to preserve the traditions of the temple under Article 25(1), and, therefore, the notifications do not run afoul of Section 3 of the Kerala Hindu Places of Public Worship (Authorisation of Entry) Act, 1965, which states that “places of public worship” like the Sabarimala temple should be open to “all section and classes of Hindus”, the review petitioners had argued.

The Sabarimala temple, located in the Periyar Tiger Reserve in the Western Ghat mountain ranges of Pathanamthitta District of Kerala, has lakhs of pilgrims thronging it every year for darshan. Pilgrims trek the Neelimala to reach the shrine, which has 18 sacred steps, to worship Lord Ayyapa after observing strict abstinence vows for 48 days.

The temple is also prominent for another reason — the selective ban on women entering it.

Security tightened at Sabarimala ahead of verdict

With the Supreme Court all set to pronounce final verdict on the entry of all women to the Kerala’s famed Sabarimala temple on Thursday, the State police has made elaborate security arrangements for the temple town to ensure security as the two-month long festival kicks off on Sunday.

Kerala police do not want to take any chances this time, particularly in the wake of the large scale protest and violence that occurred last year following the apex court verdict allowing all women to enter the temple. Right wing groups had stood guard, chased women, preventing them from entering into the temple.

With the top court now expected to give its final verdict after 64 review petitions were filed asking it to ensure that traditions and culture of the famed temple is maintained.

Elaborate arrangements have been made at the Sannidhanam, Pampa, Nilackal and at the key transit points of Ettumanur, Erumely, Chengannur and Pandalam for Ayyappa devotees proceeding to Sabarimala during the ensuing Mandalam-Makaravilakku season.

Replying to a submission by O. Rajgopal (BJP) in the Kerala Assembly on Tuesday, Minister for Devaswom Kadakampally Surendran said the Travancore Devaswom Board and various government departments had made elaborate arrangements for the 2019-20 season beginning November 17.

A Constitution Bench of the Supreme Court, led by Chief Justice of India (CJI) Ranjan Gogoi, is on Thursday scheduled to pronounce the judgment on a series of petitions seeking a reconsideration of the judgment of September 2018 that lifted the bar on menstruating women from worshipping in the Sabarimala temple in Kerala.

Sixty-five petitions had challenged the authority of the apex court to intervene in a “centuries old” belief that the Sabarimala deity is a Naishtika Brahmachari whose penance should not be disturbed by the entry of women worshippers of the menstruating age of 10 to 50 years.

Podcast | What’s at stake in the Sabarimala review petition?

Among the big issues that the Supreme Court will decide in the coming days, before the retirement of Chief Justice Ranjan Gogoi, is the review petition on the Sabarimala temple issue. A quick explainer on the original judgment and what’s at stake in the review.

Public opinion on the question of women’s entry into Sabarimala is polarised. While some cite “age-old traditions” to explain why women aged 10 to 50 should not enter the temple, others believe that such a practice discriminates against women.

Two people died and four were missing after a dyke of a fly ash pond of Reliance’s Sasan Ultra Mega Power Project in Singrauli breached on Friday evening, causing spillage on several acres of agricultural fields. “The breach occurred owing to the negligence of the plant. There are no villages which have been directly affected, […]

An Army officer was killed in a gunfight with terrorists who had sneaked into Indian territory taking cover of firing from the Pakistani side in Rajouri, and two civilians were injured in cross-border shelling on villages along the LoC in Poonch district of Jammu and Kashmir on Tuesday, officials said. Giving details of the Rajouri […]