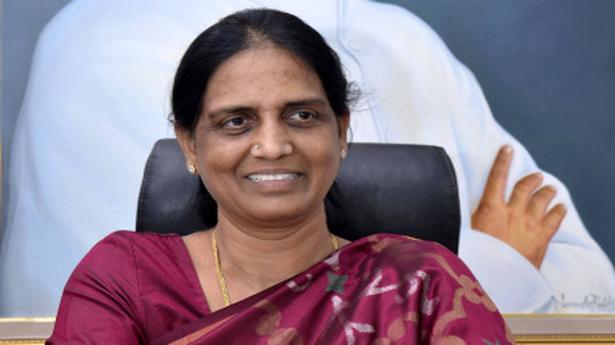 The suspense over Congress MLA and former Home Minister P. Sabita Reddy joining TRS was broken on Wednesday after her nearly two-hour meeting with Chief Minister K. Chandrasekhar Rao at his camp office.

After the meeting, Ms. Reddy’s son Karthik Reddy who was among the three siblings to accompany their mother told the media that they would formally join TRS at a public meeting at Chevella as part of the Chief Minister’s campaign for Parliament elections.

Sources said the family bargained for TRS ticket for Mr. Karthik Reddy to contest from Chevella LS constituency in consideration for joining the party which Mr. Rao conceded. In fact, Mr. Karthik Reddy had lost in 2014 elections from the same constituency at the hands of TRS candidate K. Visweswara Reddy who switched over to Congress before the Assembly elections. Ms. Sabita and Mr. Karthik Reddy joining the TRS was seen as a consequence of Mr. Visweswara Reddy being almost certain to be fielded by Congress from Chevella and the denial of the party ticket to Karthik Reddy to contest from Rajendranagar Assembly constituency recently. Ms. Sabita all along denied any such move on their part and she even addressed the public meeting of Congress president Rahul Gandhi at Shamshabad on Saturday last.

The day after Mr. Gandhi’s meeting, the Majlis-e-Ittehadul Muslimeen president Asaduddin Owaisi and an industrialist arranged a meeting of Ms. Sabita with TRS working president K.T. Rama Rao and Nizamabad MP K. Kavitha at Mr. Owaisi’s residence where it was decided that the former Minister meet the party president K. Chandrasekhar Rao later to discuss their demands.

In a bid to prevent her from deserting the party, the Telangana Congress committee president N. Uttam Kumar Reddy, Leader of Opposition M. Bhatti Vikramarka and other Congress leaders met her. It appeared that she was unlikely to quit Congress when another Congress leader A. Revanth Reddy also mediated but Ms. Sabita had other thoughts, sources said.

An industrialist Ranjit Reddy who aspired for TRS ticket from Chevella made a vain attempt to meet KCR at the camp office.

Ms. Sabita was the fifth Congress MLA heading to join the TRS.

A day after Congress leader Rahul Gandhi described the house arrest of the party’s Jammu and Kashmir (J&K) chief Ghulam Ahmed Mir and another party leader in Jammu as ‘madness,’ former Union Minister P. Chidambaram on Saturday called it a violation of his fundamental right and urged courts to take note. “Ghulam Ahmad Mir, PCC […]

The family of one of the three men killed during mob violence in Arunachal Pradesh capital Itanagar last month has declined the compensation offered by the State government and demanded punishment of the “killers” according to tribal customary law. A 48-hour shutdown against the government’s move to grant permanent resident certificates to six non-tribal groups […]

Criticising successive governments at the Centre for their improper implementation of the price support scheme, the Akhil Bharat Raitha Sangharsh Samiti, a conglomerate of farmers’ organisations, has demanded the government come up with a law that would make scientific Minimum Support Price (MSP) for farm produce mandatory. Addressing a press conference here on Friday, Maruti […]