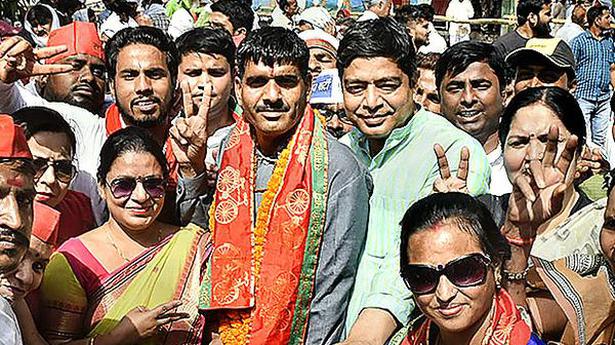 Mr. Yadav’s counsel said that they will approach the Supreme Court over the rejection of his client’s nomination.

Earlier in the day, Mr. Yadav alleged that the BJP was creating “roadblocks” in his nomination process to “prevent” him from contesting elections against Prime Minister Narendra Modi from Varanasi.

“I had filed my first nomination as an independent candidate on April 24 and on SP party symbol on April 29. If there were any issues with the nominations, why wasn’t I informed earlier. Despite lack of time, our legal team is furnishing all details to the RO (returning officer),” he said.

There was no immediate response from the BJP on the allegation levelled by Mr. Yadav, who was dismissed from the BSF after he complained about poor quality food being served to soldiers in a video, which went viral. The 43-year-old SP nominee, who is currently awaiting his fate in this elections, was surrounded by his supporters at the District Collectorate.

“We were asked to reply by 11 a.m. today. My counsel has given all the answers, correspondences with the Election Commission (EC) to the RO’s office. An NOC (no-objection certificate) is needed from the BSF, as to on what grounds I was dismissed,” Mr. Yadav, who was wearing a camouflage T-shirt, said.

“I am being stopped from fighting elections as the ‘nakli chowkidar (fake watchman)’ of the country is afraid of the ‘asli (real) chowkidar’,” he alleged.

Uttar Pradesh SP spokesperson Manoj Rai Dhupchandi alleged that Mr. Yadav was being “targeted” as he represented the aspirations and angst of farmers and jawans, and claimed the BJP got “afraid” of him as he is getting support from the people in Varanasi.

“Our supporters are also present outside the EC office in Delhi. We will continue to fight for justice,” he said.

The lush green grass on the wide median of the NH 44 stretch passing through Adilabad and Nirmal districts has become dangerous for motorists as cattle drawn by the green fodder stray on to the carriageway. Five cattle were killed apparently by speeding lorries sometime in the intervening night of Saturday-Sunday on the road close […]

It is not only Chief Minister K Chandrasekhar Rao who has been reiterating the need to bring a new Revenue Act to streamline the functioning of the Revenue Department, but also employees and general public who are equally eager for the new Act to make the department, with maximum public interface, transparent and accountable. After […]

Former Chhattisgarh chief minister Ajit Jogi’s son Amit Jogi, who heads the Janata Congress Chhattisgarh (J), was arrested on Tuesday in the state’s Bilaspur district on charges of cheating and forgery, police said. The arrest was made following a police complaint lodged against him by Sameera Paikra, the BJP candidate from Marwahi constituency in the […]