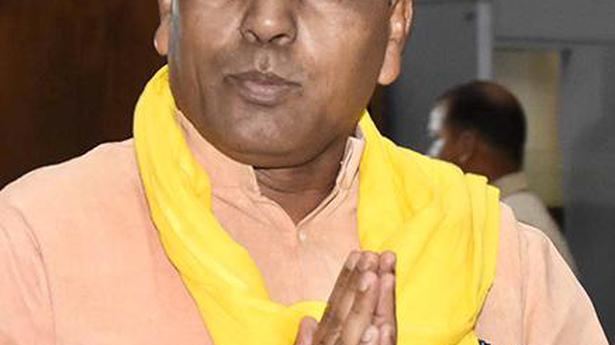 The Suheldev Bhartiya Samaj Party will hold a meeting on Monday to decide whether to continue its alliance with the BJP for the general election.

“An important meeting of party workers has been convened in Lucknow on April 1 in which the strategy for the upcoming Lok Sabha election and continuation in the government will be finalised,” SBSP general secretary Arun Rajbhar said on Saturday.

Suggestions of the party workers will be taken on these important issues, after which a final decision will be taken, said Mr. Rajbhar, who is the son of Uttar Pradesh Cabinet Minister Om Prakash Rajbhar.

Mr. Rajbhar said that the BJP was ‘overconfident’ about returning to power at the Centre, adding that it would get a reality check after the election results were out.

The SBSP leader claimed that the popularity and people’s support to the SBSP was much more than the Nishad Party, citing the votes polled by the two parties in the previous elections.

Earlier, the SBSP had said it was making preparations to contest 53 Lok Sabha seats on its own.

Judge expresses displeasure over alleged remarks made by him regarding judiciary Source: thehindu.com Related

As many as 1,997 vehicles seized, 2,436 cases booked on day 1 of intensive curbs Source: thehindu.com Related

Communist Party of India (Marxist) [CPI(M)] State secretary Kodiyeri Balakrishnan has exuded confidence that the Left Democratic Front (LDF) will win 18 seats in the Lok Sabha election and reiterated that the Bharatiya Janata Party (BJP) will not open its account in the State. Briefing reporters about the deliberations of the CPI(M) State secretariat meeting […]