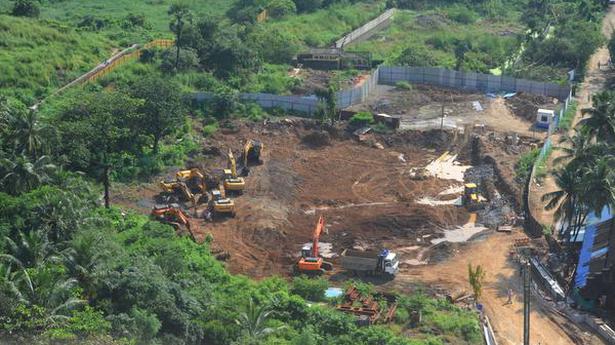 The Supreme Court on Monday restrained authorities from cutting anymore trees in Mumbai’s Aarey to set up a Metro car shed.

A special bench comprising Justices Arun Mishra and Ashok Bhushan said it will have to examine the entire thing and posted the matter for hearing on October 21 before its forest bench.

The felling of trees is being opposed by green activists and local residents.

The apex court decided on Sunday to register as PIL a letter addressed to Chief Justice of India Ranjan Gogoi by law student Rishav Ranjan seeking a stay on the cutting of trees.

A notice was posted on the Supreme Court website about holding the urgent hearing.

The MMRCL began axing the trees from Friday night, hours after the Bombay High Court had rejected a bunch of petitions by NGOs and activists against the felling of trees in the prime green area of the city.

Following protests, the Mumbai police have imposed Section 144 in and around Aarey and also arrested around 29 green activists.

The law students, in their letter, had appealed for urgent hearing by the top court which is on the Dasara holidays for a week, contending that “part of Aarey will be cleared with all trees axed leading to irrevocable loss”.

“As we write this letter to you the Mumbai authorities continue to kill the lungs of Mumbai i.e. Aarey forest by clearing trees near the Mithi Bank river and according to news reports 1,500 trees have already been cleared by the authorities,” the letter said.

“Not only this but our friends are put in jail who were peacefully organising a vigil against the acts of the Municipal Corporation of Greater Mumbai (MCGM) with the Mumbai Metro Rail Corporation (MMRC) at the site,” it added.

N. Ram on the Bofors scandal

Chairman of ‘The Hindu’ Group N. Ram spoke on the Rafale deal, at the Mumbai Collective recently. “In both cases, professional and technical standards were not applied to decision-making,” Mr. Ram said, when asked about the common strands between the Bofors gun deal and the Rafale case. “In Bofors, for example, the rival French firm […]

‘CBI takes care of human rights of accused during interrogation’

CBI Director Rishi Kumar Shukla on Tuesday said the agency “takes care that the human rights of the accused are not violated during interrogation”, according to a statement of the National Human Rights Commission (NHRC). Mr. Shukla was addressing the interns of the NHRC’s winter internship programme here on the topic of “safeguards during investigation/interrogation […]