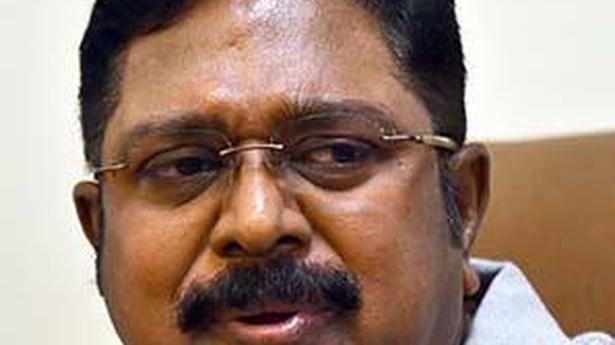 The Supreme Court on Tuesday directed the Election Commission of India (ECI) to allot a common/free symbol to the T.T.V. Dhinakaran-led Amma Makkal Munnetra Kazhagam (AMMK) even as it ruled that the group had no exclusive right to the ‘pressure cooker’ symbol.

The AMMK is contesting a total of 40 Lok Sabha and 19 Assembly constituencies spread across Tamil Nadu and Puducherry in the forthcoming elections.

A Bench led by Chief Justice of India Ranjan Gogoi ensured a “level playing field” for Mr. Dhinakaran by ordering the ECI to, after due and proper satisfaction, allot any one of the 198 common symbols. “The group considered itself heir to AIADMK,” Justice Gogoi observed. “They missed the bus. But they are still a group. Reality is, however strong a man, he is known by the symbol. Giving different symbols to his candidates will ruin his career,” he added.

However, the court made it clear that the order should not in any manner be interpreted as a judicial recognition of Mr. Dhinakaran’s group, which has neither been registered nor recognised as a political party under Section 29A of the Representation of the People Act, 1951.

Specifically, the Bench ruled that the group’s candidates, if elected, would be considered independents for “all purposes”, including for the purposes of the Tenth Schedule (disqualification on the ground of defection) of the Constitution, rather than members of a political party. This means that any victorious candidate from the group will not be subject to a whip and can choose to ally with any party or alliance.“The order of ours will not amount to the recognition of the group as a political party, registered or unregistered. The ECI alone will take this decision [to recognise a group as a political party],” the apex court clarified.

The hearing, which spanned over two hours, saw extensive arguments with Mr. Dhinakaran group’s pressing its claim to the ‘pressure cooker’ symbol. “The claim of the petitioner [Mr. Dhinakaran] to the common symbol of pressure cooker in an exclusive manner cannot be accepted or acknowledged,” the court ruled. The Bench highlighted that the group had never applied for registration as a political party under Section 29A of the Representation of the People Act or the guidelines of the ECI.

“This anarchy you have brought upon yourself,” Justice Gogoi observed. “You should have applied on March 15 when we refused your special leave petition. You could have applied under Section 29A yesterday. Why do you think we adjourned the case yesterday?” the CJI remarked.

At one point, senior advocate A.M. Singhvi countered that “if we had registered as a political party, it would have been akin to giving up our claim over the ‘two leaves’ symbol. The rival group is getting a walkover now”. Senior advocate Kapil Sibal, also for Mr. Dhinakaran, said the ECI should ensure a level playing field in the build-up to free and fair elections.

To this, the CJI turned to the ECI’s side and asked: “Can you allot any one of the free common symbols to all the candidates of Mr. Dhinakaran group on the last date of withdrawal?”

But the rival O. Panneerselvam-E. Palaniswami faction, which was recognised as the true heir of the original AIADMK party and successor to the ‘two leaves’ symbol, strongly objected to Mr. Dhinakaran’s claims. “Law only recognises a registered party or a national or State party which is recognised, not an amorphous or loose front like this,” senior advocate Mukul Rohatgi countered. Mr. Dhinakaran called the court’s decision a “major victory”. Addressing journalists in Chennai, he said that he had expected to be allotted the “pressure cooker” symbol. But, the court had given a common symbol instead. “We will register a thumping victory,” he added.

Only one key LeT operative now in Pakistan jail

LeT chief Hafiz Saeed and co-founder Amir Hamza are currently said to be operating from their homes in Lahore Source: thehindu.com Related

Ten foreign nationals belonging to Kyrgyz republic and Kazakhstan, who were residing at a mosque in Sattenapalli, have been arrested by the Guntur Rural Police. They were allegedly staying in the mosque since March 18, after coming to India on February 25. Cases under Sections 420, 269, 270, 188 IPC, Section 3 Epidemic Diseases Act, […]