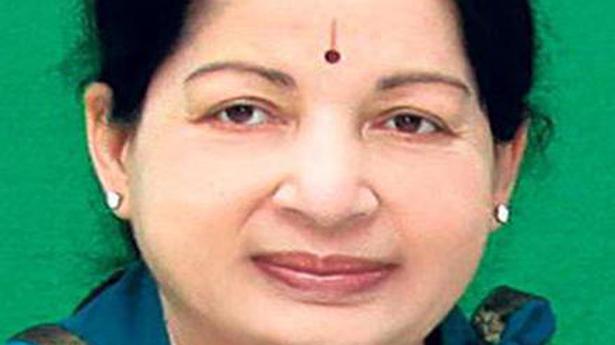 The Supreme Court on Tuesday dismissed an appeal filed by the Central Bureau of Investigation challenging a Madras High Court judgment setting aside the “three lakh U.S. dollars gift case” against former Tamil Nadu Chief Minister Jayalalithaa and two others on the ground of inordinate and unexplained delay at the investigation and trial stages.

A Bench led by Justice R. Banumathi orally observed that several years have passed in the investigation and trial of the case.

In 2012, the Supreme Court issued notice to Jayalalithaa after the CBI said the High Court committed a serious error in not considering the various aspects in accordance with law. Besides Jayalalithaa, former Agriculture Minister K.A. Sengottaiyan and former Minister Azhagu Thirunavukkarasu, who were cited as accused for abetment, were issued notice.

Jayalalithaa, who passed away in December 2016, moved the Madras High Court seeking to quash the proceedings mainly on grounds of delay in registering the FIR and filing the charge sheet. She also challenged an order of the Principal Judge for CBI cases dismissing her petition seeking discharge from the case.

Mr. Sengottaiyan and Mr. Thirunavukkarasu filed petitions in the High Court against the dismissal of their discharge applications by the trial court.

The CBI’s appeal is against the common judgment dated September 30, 2011. Its allegation against Jayalalithaa was that she received a remittance of $300,000 by way of a demand draft dated December 23, 1991, issued by Bankers Trust Company, New York, drawn on ANZ Grindlays Bank, St. Halia, Jersey.

The CBI contended that the issue came to the notice of the Income Tax department only in 1996 and was duly communicated to the Tamil Nadu Chief Secretary for taking action.

As such there was no delay. It contended that the High Court ought to have seen that as per the allegation in the FIR, a detailed investigation was to be conducted in the U.S., the U.K. and the UAE, and this exercise consumed considerable time for finalising the investigation.

Karnataka may have taken up several innovations in school education, but it still has a long way to go. This was reflected in the ‘Performance Grading Index (PGI) 2017-18 – Catalysing transformation change in school education’ report that was released recently by the Ministry of Human Resource Development (MHRD). Karnataka appears in the third grade […]

Rebel MLAs too on temple run

Amid political crisis in the State, rebel Congress and JD(S) legislators continued their temple run in the neighbouring State of Maharashtra. On Saturday, the MLAs, who are camping in Mumbai, sought the blessings of Sai Baba at Shirdi. The legislators, who had planned to visit other places in Maharasthra, returned to thier hotel in Mumbai […]