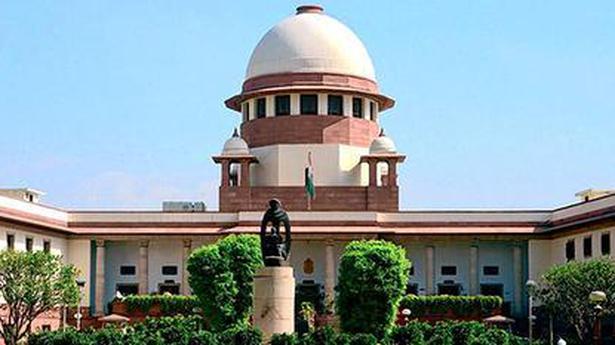 The Supreme Court on Wednesday blamed the Centre and the Assam government for being lax about tackling the inflow of illegal foreigners into the northeastern State and their deportation.

“It has become a joke. You have not done anything,” Chief Justice of India Ranjan Gogoi addressed the Assam government.

The court pointed out that though the State’s foreigners tribunals had identified over 58,000 illegal immigrants, the detention centres house only 900.

Solicitor-General Tushar Mehta, for Assam, explained that the variance in numbers is because orders of the tribunals are given ex-parte as the alleged foreigner absconds and merges with the local populace the moment proceedings against him begin.

The court is hearing a petition filed by activist Harsh Mander about the dismal living conditions within the four walls of the detention centres in the State. The court noticed that many detainees continue to be lodged inside these centres even after the expiry of their term of imprisonment for illegally entering the country.

The Bench expressed annoyance at the State’s inability to give a clear account of the number of illegal immigrants identified, the exact number of cases referred to the foreigners tribunals, the details of persons manning these tribunals, etc.

“We have given far too many opportunities… the State (Assam) is facing external aggression… We like to know what the State is trying to do to tackle the problem?” Chief Justice Gogoi said.

At one point, referring to the main issue raised in the petition about the lack of basic facilities for the 900 detainees lodged in the centres, Chief Justice Gogoi asked “you (Assam) are unable to deal with the base problem of 900 illegal immigrants, how will you deal with over 58,000 of them?”

The Bench then directed the Assam Chief Secretary to file an affidavit by March 26 about the number of illegal foreigners, their numbers in deportation centres and those deported from the State. The court initially wanted to summon the Chief Secretary but desisted after Mr. Mehta’s intervention. The State has to further update the court on the adequacy of foreigners tribunals.

On February 19, the court and the Centre had both agreed that illegal immigrants should not languish for long in detention centres in Assam. The Centre had on that day assured the court that it would hold consultations with the Assam government on a scheme to expedite the process of deportation or repatriation of illegal foreigners and report back to the Bench on March 13.

On Wednesday, Mr. Mehta informed the court that officials of the Home and External Affairs ministries along with the Bureau of Immigration and Assam Home Department had met on March 12. Mr. Mehta said he needed more time to file an affidavit.

Mr. Mander had in his petition highlighted the plight of families, who languish in the State’s six detention centres as “declared foreigners,” separated from each other and their children.

The petition, whose contents was inspired from a report submitted by Mr. Mander as Minorities Monitor for the National Human Rights Commission, primarily conveyed the helplessness of children who were just over six years old, separated from their parents who are held inside these detention centres.

With senior IPS officer Rajeev Kumar not responding to the summons issued by the Central Bureau of Investigation (CBI), the specials teams set up by the central agency visited various places in the city on Wednesday. CBI officials made multiple trips between the Nizam Palace, agency’s headquarters in the State, and the Central Government Officers […]

Panscheel must for peace: Chinese envoy

The Chinese envoy on Friday urged India to follow the principle of peaceful co-existence as devised in the Nehruvian era. Speaking at a public reception to celebrate the 70th anniversary of the founding of the People’s Republic of China, Ambassador Sun Weidong said the bilateral relationship had received a new boost after the Wuhan summit […]

As the indefinite strike by doctors affiliated to the Federation of Government Doctors Association entered the third day on Sunday, the Tamil Nadu Medical Students Association (TNMSA) has decided to support the strike from Monday. TNMSA, which comprises house surgeons and post graduates, in a press release stated that they would take part in forthcoming […]