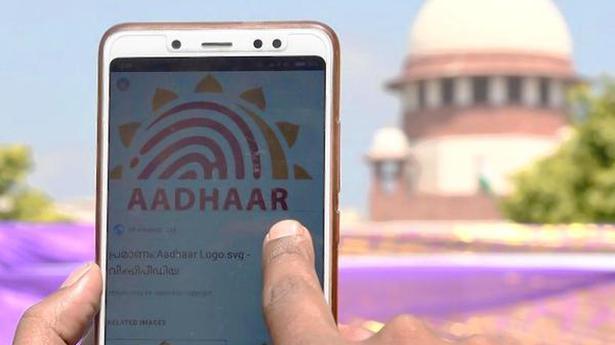 The Supreme Court on Monday refused to entertain a petition seeking a direction to the Centre to take steps for linking social media accounts with Aadhaar to check the menace of “fake and paid news“.

The apex court granted liberty to the petitioner to approach the high court.

The matter came up for hearing before a bench, headed by Justice Deepak Gupta, which observed that a similar matter is already pending before the Madras High Court.

Advocate and BJP leader Ashwini Kumar Upadhyay, the petitioner in the case, withdrew his plea.

The apex court is already hearing a separate petition filed by Facebook Inc seeking transfer of cases related to Aadhaar linking with social media accounts pending before high courts of Madras, Bombay and Madhya Pradesh to the top court.

The plea has sought a direction to the government to link profiles on social media platforms, including those on Facebook and Twitter, with Aadhaar and also a direction to the Election Commission and the Press Council of India for suitable steps to control fake and paid news.

It has also sought a direction to the Centre to deactivate duplicate and fake social media accounts in order to control fake and paid news.

The plea has sought directions to the Centre for taking steps to declare publication of paid news and political advertisements 48 hours before an election as a “corrupt practice” under the Representation of People Act, 1951.

It claimed that 10% of the 3.5 crore Twitter handles were duplicate, which included hundreds in the names of eminent people such as chief ministers and even the president and the prime minister of the country.

The plea claimed that millions of Facebook accounts were bogus, which used real photos of constitutional authorities and were used to promote casteism, communalism and separatism, endangering national integration and were also the root cause of several riots.

“Exposure to accurate information is a necessity for electors to make an informed choice, but fake news has the tendency to influence this choice in a negative manner. The publication of fake news involves use of black money, under-reporting of election expenses of political parties and candidates and indulging in other kinds of malpractice,” the petition said.

The enforcement wing of the Motor Vehicles Department (MVD) served notice on a youth from Perambra whose car was recently caught on camera on the Thamarassery Ghat Road with two passengers travelling in its boot space in a dangerous manner. A. Safeer, who reportedly owned the vehicle, was asked to report at the Regional Transport […]

Real estate boom back in Donakonda

Real estate boom has returned to Donakonda, which has been in the race for location of the Andhra Pradesh capital before it lost to Thullur in Guntur district, in the wake of reported rethinking in the YSRCP government on the suitability of Amaravati. Having an indication on the possibility of Donakonda getting selected for the […]