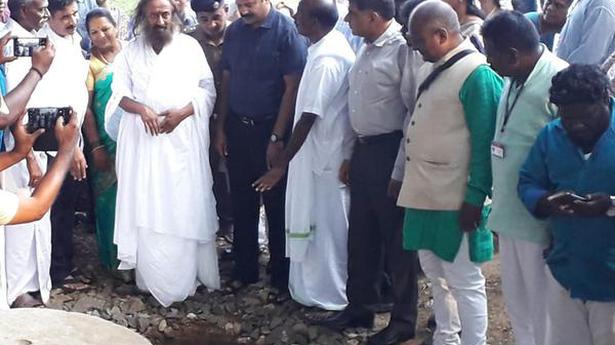 While appreciating the efforts of rural women who saved water from the dried up riverbed in Salamanatham village in Vellore district, Art of Living Founder Sri Sri Ravi Shankar said that to counter the looming water crisis, conservation of water and plantation of saplings should be taken up scientifically. He was addressing a gathering at the village on Monday and he honoured the villagers who were part of the Naganadhi Rejuvenation Project.

The spiritual leader was accorded a rousing welcome by the villagers and his followers. He visited the sites where the workers had taken efforts to conserve groundwater by adopting recharging methods on watercourses in Salamanatham on the Kannamangalam-Arcot Road.

Collector A. Shanmuga Sundaram said that women were given opportunities to revive this river and the district administration has implemented similar projects in other blocks through District Rural Development Agency.

Once the lifeline of Vellore villages, the river went dry and despite the efforts of farmers to grow crops such as millet, tomato, groundnut and banana that require less water, returns from the barren lands fell inadequate to sustain them.

In 2014, taking the guidance of geologist Lingaraju Yale, ex-director of Karnataka State Remote Sensing and Application Centre and with the support of Art of Living river rejuvenation project, Chandrasekaran Kuppan, director of the Naganadhi River Rejuvenation programme, designed a model to revive the river. Three important steps were taken simultaneously. While there was a campaign to boost the confidence of villagers using remote sensing and satellite maps, Mr. Chandrasekaran and his team prepared the plans. They built 600 recharge wells and 600 boulder checks. These structures ensured the flow of water into the aquifers. To hold the water, hundreds of hardy, drought-resistant saplings were planted around and across the river basin.

GIS-based maps and long term rainfall patterns were analysed to estimate the availability of water for recharging aquifers and recharge structures were constructed at appropriate points.

When there were rains in 2015 and 2016, after the structures were constructed, water started flowing into them. “Their river became alive again, after 15 years! Seeing the success of the revival efforts, government support was assured,” says Mr. Chandrasekaran Kuppan.

“Thanks to Guruji, the efforts of our workers paid rich dividends, and the groundwater level saw a phenomenal growth. We get pure sweet water at the depth of 30 feet now, whereas it was completely dry during the first three years of the project,” said Vidhya Baskaran from Roja SHG from Salamanatham.

On the 87th Anniversary of the Indian Air Force, the Air Force Day parade was held at the Hindon Air force station. The air display commenced with flag-bearing sky divers of the Akash Ganga Team dropping out of an AN-32 aircraft with their colourful canopies. There was also a marching contingent Air Chief Marshal Rakesh Kumar Singh […]

TDP team to go into post-poll attacks on cadre

TDP national president and former Chief Minister Nara Chandrababu Naidu has announced that a party delegation would visit Palnadu region which has witnessed violent attacks after the general elections, on Friday. The TDP delegation would consist of senior leaders who would visit the homes of the partymen injured in the attacks and interact with their […]

The Justice S.R. Singaravelu Commission of Inquiry has concluded that Dalit youth E. Elavarasan committed suicide by throwing himself before a train in Dharmapuri on July 4, 2013. The commission was constituted the same year by the then CM Jayalalithaa after Dalit activists and rights groups claimed that it was a case of honour killing. […]