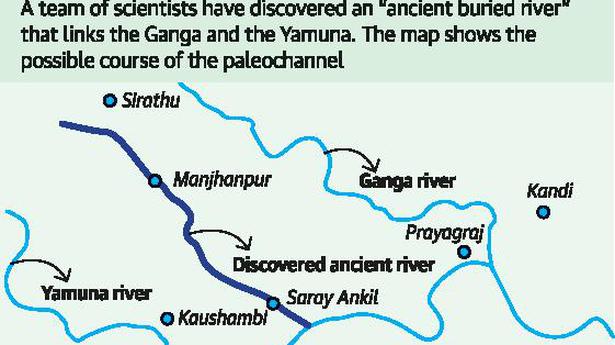 The Union Water Ministry has excavated an old, dried-up river in Prayagraj (formerly Allahabad) that linked the Ganga and Yamuna rivers. The aim is to develop it as a potential groundwater recharge source, according to officials at the National Mission for Clean Ganga (NMCG), a body under the Union Jal Shakti Ministry that coordinates the cleaning of the Ganga.

The “ancient buried river” as it was described at a conference organised by the Ministry, is around 4 km wide, 45 km long and consisted of a 15-metre-thick layer buried under soil.

According to Executive Director, NMCG, D.P. Mathuria, the discovery was made last December by a team of scientists from the CSIR-NGRI (National Geophysical Research Institute) and the Central Groundwater Board during a helicopter-borne geophysical survey covering the Prayagraj and Kaushambi region in Uttar Pradesh.

These paleochannels reveal the course of rivers that have ceased to exist.

The newly discovered river, according to Mr. Mathuria, was a “buried paleochannel that joins the Yamuna river at Durgapur village, about 26 km south of the current Ganga-Yamuna confluence at Prayagraj.

The genesis of the palaeochannel’s discovery followed a 2016 report of a seven-member committee, headed by Professor K.S. Valdiya of the Jawaharlal Nehru Centre for Advanced Scientific Research (JNCASR), commissioned by the Water Resources Ministry.

This report concluded that evidence from palaeochannels suggested that the mythological Saraswati river did indeed exist. They claimed to have based their conclusions on reports and maps of palaeochannels in north India and a separate, ongoing project by the Central Groundwater Board to map the aquifers (extremely deep stores of groundwater) of India.

He was admitted to Apollo Hospital on August 10 after he tested positive for COVID-19. Source: thehindu.com Related

The number of confirmed COVID-19 cases in India crossed 90 lakh (9 million) on November 19, according to data collated from various State Health Departments. As of 10.45 p.m. IST on November 19, the figure stood at 90,00,486 with 1,32,177 deaths. You can track coronavirus cases, deaths and testing rates at the national and State […]