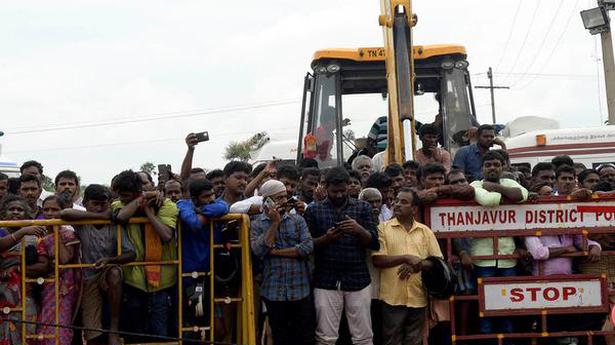 Thousands of people thronged Nadukattupatti to catch a glimpse of the marathon rescue operation.

The 5-km village road that leads to Nadukattupatti from the Tiruchi-Dindigul highway struggled to handle the mounting traffic. People from all walks of life, including politicians, voluntary rescue workers, officials and religious leaders, thronged the site of the rescue operation. Visitors poured in from places as far as Madurai, Dindigul, Theni, Erode and Karur districts.

Prayers have been pouring in for Sujith Wilson from across the country, even as the mission to rescue him from an abandoned borewell continues.

Devotees at places of worship across the State offered special prayers for the two-year-old’s safe return.

#SaveSujith has been trending on Twitter since Friday night, with ideas and support coming in from people across the world.

(With inputs from Kathelene Antony)

The CPI has rubbished the police claim that Maoists Mani Vasakam, Karthi, Arvind and Rema had been shot dead in encounters with the Thunderbolt commandos in Attappady forests. A team of CPI leaders, who visited the spot of the killing at Manjakkatti, near Agali, on Friday, described the police action as “a cruel homicide meant […]

Children consider their father as the ‘Super Star’ and take him as the role model. It is this trait that has been targeted to ensure improved hygiene and sanitation in the countryside. In a novel programme implemented across Chittoor district by the Population Services International (PSI) India, a non-governmental organisation working in health and sanitation […]

Leaders of Andhra Pradesh Rythu Sangham on Thursday urged the government to relax norms for issue of white ration cards to farmers in the backward and drought-prone districts of the State. In a statement, sangham president Y. Kesav Rao and general secretary P. Peddireddy referred to the guidelines for issue of ration cards and said […]