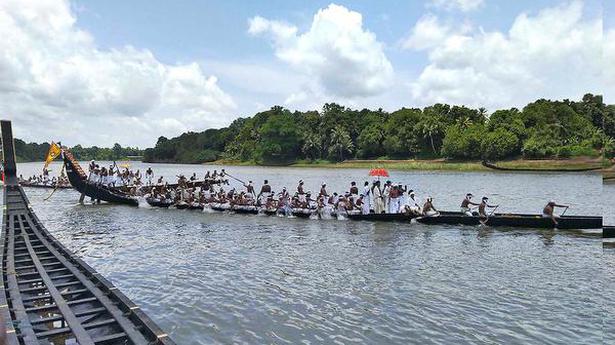 Curtains will come down on the three-month long annual season of Vallasadya at the Sree Parthasarathy Temple at Aranmula on October 6.

Mr. Radhakrishnan said crew of seven palliyodams would take part in the Vallasadya to be held on the last day on October 6.

Vallasadya is a sumptuous feast given in traditional style to the snakeboat crew by devotees as an important offering to the presiding deity at Sree Parthasarathy Temple situated on the banks of river Pampa.

Devotees consider the Palliyodam as a vessel belonging to the deity of Parthasarathy Temple and they offer the feast, Vallasadya, to the boat crew, taking them as representatives of the deity.

The number of Vallasadya offered at the temple are on the rise every year, says Mr. Radhakrishnan.

Presently, 52 karayogams on the banks of river Pampa in the upstream and downstream of Aranmula have got their own Palliyodam.

Each karayogam has been maintaining their Palliyodam with utmost care, taking it their deep sense of devotion to Lord Parthasarathy.

Mr Radhakrishnan said the crew of Nellickal and Thekkemuri Palliyodams partook off the Vallasadya held at the Sree Parthasarathy Temple premises on Wednesday.

We will build a ‘new’ Kashmir for everyone, says PM Modi to Kashmiri Pandits in Houston

After a slump during COVID-19, sales are seeing an uptick Source: thehindu.com Related