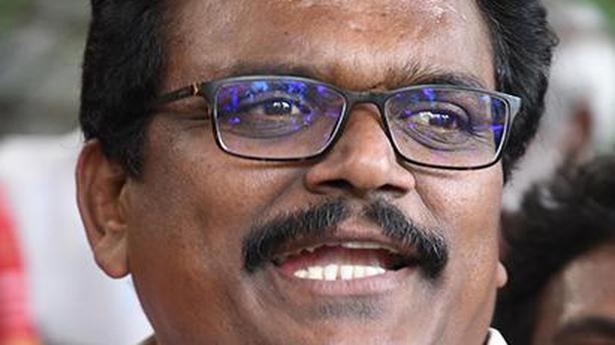 Even as the Income Tax department claimed that it seized ₹1.48 crore from the premises of an Amma Makkal Munnetra Kazhagam (AMMK) functionary at Andipatti, Theni, party member Thanga Tamilselvan said on Wednesday that it was a drama enacted by Deputy Chief Minister O. Panneerselvam.

According to the taxmen, the cash was neatly packed in 94 envelopes on which the ward numbers, number of voters and the amount – ₹300 per voter – was written.

All these wards were within Andipatti assembly segment which goes to the poll on Thursday.

The premises where cash was seized belonged to an AMMK functionary. In fact, the party office functions from the ground floor of the premises.

A statement from Mr. Murali Kumar said that the sworn statement of the person present in the premises was recorded. He stated that ₹2 crore in cash was brought in there for distribution to voters in Andipatti panchayat union area on April 16.

Initially, a group of party workers overpowered the flying squad persons standing guard outside the premises, broke open the door and snatched some cash packets.

The police had to open fire in the air for the taxmen to continue their job. The miscreants fled with a few cash packets. All the remaining cash was seized.

A police officer said that they have booked cases against 150 persons under seven sections of IPC, including obstructing the officials from discharging their duties.

Four AMMK functionaries were arrested. Para-military forces have been deployed in the vicinity to ensure that there were no untoward incidents.

A postal ballot paper for Andipatti assembly byelection which was already marked for AMMK candidate was also found in the premises and seized.

Mr. Tamilselvan told reporters at Andipatti that neither the building nor the seized cash belonged to the party and blamed the AIADMK for tarnishing the image of his party.

The building, he said, was owned by an AIADMK functionary. The AMMK Andipatti union secretary’s office was functioning in a small portion. Suddenly, the flying squad came and checked the premises and gave an impression that they seized cash from the AMMK’s possession. This was totally false and incorrect, he maintained.

Election flying squad members seized ₹43 lakh from the house of another AMMK functionary at Ethirkottai near Sattur, the native place of S.G. Subramanian, the party candidate for Sattur byelection, on Wednesday.

The Election Commission has sought a detailed report from poll authorities. “Once the report is received, we will take a considered view,” PTI quoted an official as saying.

The Indian Navy in collaboration with Indian Oil Corporation Limited (IOCL) has adopted a new fuel with higher technical specifications – High Flash High Speed Diesel (HFHSD – IN 512)- which was formally launched on Monday. “The new specification will not only ensure a better quality fuel but also result in a reduced carbon footprint,” […]

The Left parties on Monday accused Prime Minister Narendra Modi of trying to mislead people with a “bunch of lies” on the National Register of Citizens (NRC) and said he was rattled by the intensity of the protests against the Citizenship (Amendment) Act (CAA). In a fact-check sheet, the CPI(M) sought to counter Mr. Modi’s […]