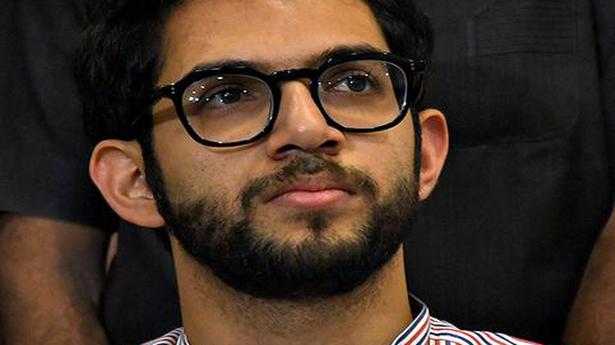 Taking cue from Uddhav Thackeray’s renewed assertion for equal sharing of power with the BJP, which failed to register desired performance in the Maharashtra assembly polls, newly-elected MLAs of Shiv Sena on Saturday demanded that Aaditya Thackeray be made the chief minister in the next government.

The results of recently-concluded polls saw the ruling BJP losing 17 seats from its previous tally of 122, a development that political observers believe has increased the bargaining power of the Uddhav Thackeray-led party whose tally too came down to 56 seats from the 63 in 2014.

“We want to see Aaditya Thackeray as the next chief minister. But Uddhavji will take the final decision,” said Pratap Sarnaik, MLA from neighbouring Thane city.

He was responding to a question on whether Sena will seek the help of the Congress-NCP combine to install its own chief minister in place of incumbent Devendra Fadnavis of the BJP.

Mr. Sarnaik and other elected MLAs on Saturday assembled at ‘Matoshree’, the suburban residence of the Thackerays, to attend a party meeting.

Another MLA Abdul Sattar, who defected to the Sena from the Congress ahead of polls, also endorsed Sarnaik’s view.

“Uddhavji will take the final call on this,” said Mr. Sattar, once considered a close aide of former chief minister Ashok Chavan.

In the elections, results for which were announced on October 24, the BJP won 105 seats and the Sena 56 while the NCP and the Congress bagged 54 and 44 seats, respectively.

The verdict came as a shocker for the BJP which had set itself a higher target to secure the absolute majority on its own. The changed scenario has emboldened the Sena which knows well that it is in a position to call shots and endorse Mr. Aaditya as the CM face.

Mr. Aaditya, 29, became the first Thackeray since the party was founded in 1960s to enter the poll fray and win. He won from Worli seat in Mumbai, a Sena pocketborough.

On the day of verdict, Mr. Thackeray hardened the Sena’s stand by reminding the BJP of the 50:50 formula “agreed upon” between BJP president Amit Shah, Mr. Thackeray and Mr. Fadnavis ahead of the 2019 Lok Sabha polls.

According to sources, the formula entails rotational chief ministership between the Sena and the BJP and the equal sharing of Cabinet berths.

“I contested less number of seats for Lok Sabha and assembly elections. I cannot accommodate the BJP everytime. I want to remind the BJP the formula which was worked out in the presence of Amit Shah,” Mr. Thackeray had said.

The speculation about an “interesting possibility” started doing rounds on the day of the poll verdict when former chief ministers Ashok Chavan and Prithivraj Chavan of the Congress said the party should consider all options to keep the BJP out of power.

NCP chief Sharad Pawar had ruled out such a possibility to back the Sena. Mr. Thackeray had said the popular mandate to rule was given to the BJP and his party.

State Congress president Balasaheb Thorat too ruled out any truck with the Sena to keep the BJP at bay. However, he cryptically said that if the Sena comes with a proposal, the Congress will seek advice of its high-command.

However, Prime Minister Narendra Modi and Union Home Minister Amit Shah, who also holds the BJP chief’s post, have repeatedly said that Fadnavis will continue to be at the helm.

On Friday, Shiv Sena MP Sanjay Raut posted a cartoon to take a dig at the BJP.

New Delhi Furnish figures of jobs given to north Indians in last 5 years: Priyanka Gandhi asks Gangwar Stepping up its attack on Union minister Santosh Gangwar for saying that recruiters complain of lack of “quality people” in north India, the Congress on Monday demanded an apology from him, while its general secretary Priyanka Gandhi […]

Veteran actor Sathar, who figured prominently in South Indian films in the 1970s and 80s, died in a private hospital at Aluva near here early on Tuesday. He was 67. He had been undergoing treatment for liver-related ailment for the last three months. The body was taken to his house at Kadungalloor and will be […]

Journey to school in an overcrowded autorickshaw proved fatal for a four-year-old boy at Digapahandi in Odisha’s Ganjam district on Wednesday. Police said Ajay Pradhan fell off the vehicle when the driver made a sudden turn near the Tilottama Nagar area in Digapahandi. The boy sustained serious injuries and died at a hospital. Ajay was […]