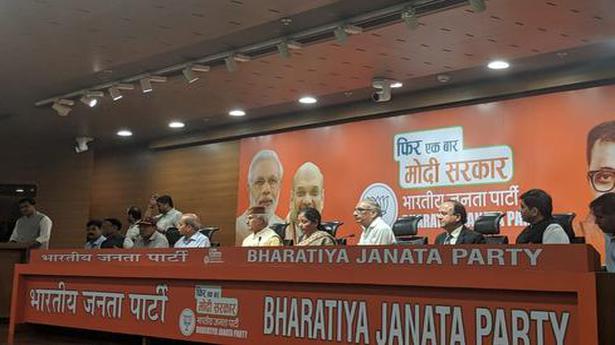 Seven senior retired officers of the armed forces , including five Lieutenant-Generals, joined the BJP on Saturday in the presence of Defence Minister Nirmala Sitharaman at the BJP headquarters here.

Two former Deputy Chiefs of Army Staff, Lt. Gen. J.B.S. Yadav and Lt. Gen. S.K. Patyal, were among those who joined the party. The other three former top officers who joined the BJP were Lt. Gen. R.N. Singh, who had served as the director general of military intelligence, Lt. Gen. Sunit Kumar, the former director general of information services and IT, and Lt. Gen. Nitin Kohli, who had served as the signal officer-in chief at Army headquarters.

Inducting them into the party, Ms. Sitharaman said at a press conference: “It is indeed my pleasure to receive such very well-decorated senior officers of the armed forces into the party…The BJP benefits from the presence of such senior ex-servicemen. They can guide on policies on nation security building.”

Lt. Gen. Yadav said though he admitted that officers of the armed forces are usually not associated with any political party, but he believed that “every person has the right to have political thought and should use that right”.

“Our country is going through an important phase. I believe our country is progressing towards development. Our national security is in capable hands…We are retired, not tired,” he said, adding that the retired officers would use their experience for the country and to participate in the political process.

Lt. Gen. Patyal added that he had served as Deputy Chief under the leadership of Ms. Sitharaman.

“Our Prime Minister and his ministers have taken a very large number of steps…The hardest decision that our Prime Minister took was to go deep into the heart of terrorism and strike,” Lt. Gen. Patyal said, referring to the Indian Air Force strike at Balakot, Pakistan.

Backward Classes Welfare Minister M. Sankara Narayana on Monday held a review meeting with the irrigation engineers in charge of the Tungabhadra High Level Canal and its branch canals following breaches to them on two consecutive days, leading to loss of irrigation water in the district. Former Uravakonda MLA Y. Visveswara Reddy also joined the […]

With a bulk of COVID-19 cases being reported from urban settlements, the government has suggested that additional manpower be deployed in these areas Source: thehindu.com Related

‘Pattana Pragathi’ programme should be conducted across the State on the well-laid foundation of ‘ Palle Pragathi’ with focus on Dalit bastis where a majority of the poor live, said Chief Minister K.Chandrasekhar Rao here on Tuesday. As part of the State Municipal Conference held here at Pragathi Bhavan to discuss modalities of the proposed […]