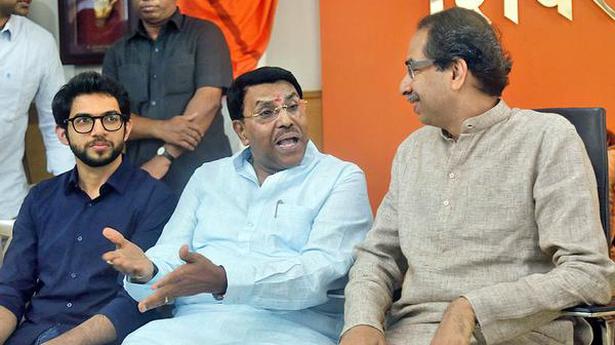 A day before counting of votes polled in the general elections and the announcement of results, senior Nationalist Congress Party (NCP) MLA from Beed and former minister Jaydutta Kshirsagar on Wednesday joined Shiv Sena in the presence of president Uddhav Thackeray at Sena Bhavan. Mr. Kshirsagar was a minister of Maharashtra State Road Development Corporation (MSRDC) in the previous Congress-NCP government.

“I had decided to quit NCP long back. I worked tirelessly for the growth of NCP in Beed, but leaders from that party blocked me and tried to stop me from working,” said Mr. Kshirsagar. The former minister added that he felt insulted within the NCP and even his workers were asking about his next move. “One can tolerate insult only up to a point, it had reached the peak in my case,” he said.

Mr. Kshirsagar is said to be unhappy over the importance given to Leader of Opposition in the Council Dhananjay Munde within the NCP and his nephew Sandip Kshirsagar, who is likely to be the party’s new face in Beed Assembly constituency. The former NCP minister had campaigned for the Bharatiya Janata Party (BJP) candidate from Beed Lok Sabha constituency Preetam Munde and had also met Sena president Uddhav Thackeray in Mumbai. Since then, speculations were rife about his quitting the NCP and joining Sena.

“You will never regret the decision to join Sena. The popularity of the Sena is growing and large number of committed workers are coming to the party. Till today, the Sena never attempted to make inroads at Beed, but now that you are here, you can work as per your wishes for the growth of the party,” Mr. Thackeray reportedly told Mr. Kshirsagar.

Meanwhile, NCP’s chief spokesperson Nawab Malik said Mr. Kshirsagar had mentally left the party long ago and had continued to remain a member formally only to save his position as MLA.

“Kshirsagar quitting the NCP will not have any bearing on the party’s prospects,” Mr. Malik said.

Mocking the decision, Mr. Munde said, “He deliberately chose this day. After the scale with which NCP will win Beed, the Sena would not have allowed him to join later,” he said.

The Congress is Capable of Winning it Alone: Sheila Dikshit

In December 2013, Sheila Dikshit’s 15-year-old Congress government in Delhi lost an election, winning a meagre eight seats in the 70-member house. Dikshit herself lost to AAP challenger Arvind Kejriwal. In two successive polls-to the 2014 Lok Sabha and the 2015 state assembly-the Congress drew a blank in the capital. As the party looks for […]

Jadavpur University on the boil over violence in JNU

The Jadavpur University [JU] had been on the boil since Monday morning in protest against the violence in the Jawaharlal Nehru University on Sunday. The situation turned volatile late in the evening when supporters of the BJP and the students came face to face near the university. Around 9 pm, the two groups had a […]

PMK founder S. Ramadoss presented the party’s shadow Budget for 2020-21 on Wednesday. Dr. Ramadoss rejected the National Register of Citizens, prescribed free bus rides for women, proposed to implement only the “good aspects” of the National Education Policy and demanded that breakfast (with milk) be provided to school students in Tamil Nadu. Days after […]