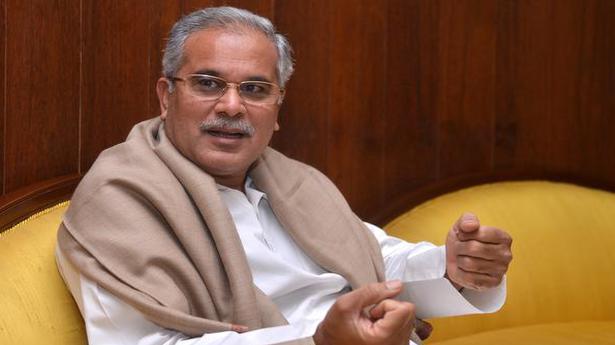 The Supreme Court on October 21 stayed the criminal trial in the alleged sex CD case involving Chhattisgarh Chief Minister and senior Congress leader Bhupesh Baghel as an accused and sought his response on the CBI’s plea to transfer the matter out of the State.

A Bench headed by Chief Justice Ranjan Gogoi was told by Solicitor General Tushar Mehta, appearing for the CBI, that it was seeking transfer of the case out of Chhattisgarh as two prosecution witnesses have complained to the probe agency that they have been threatened.

The Bench, which also comprised Justices S.A. Bobde and S.A. Nazeer, sought response of the Chief Minister on the CBI plea and in the meanwhile, stayed the ongoing trial in the case.

Mr. Mehta said, for the sake of fair trial, the CBI has filed the plea seeking transfer of the case out of the State as the accused is now the Chief Minister and there are chances of the witnesses getting coerced.

The CBI had registered a case in 2017 against Mr. Baghel, then Chhattisgarh Congress president, on a complaint that he had allegedly tried to frame the then State PWD Minister and BJP leader Rajesh Munat in the fake sex CD case.

Mr. Munat, the then Chhattisgarh PWD Minister in the Raman Singh Cabinet and a BJP leader, had filed a complaint against Mr. Baghel and senior journalist Vinod Verma for allegedly tarnishing his image through a “fake” sex CD.

In 2017, Chhattisgarh police had swooped down on journalist Verma’s house in Ghaziabad and had picked him up for conspiring with Mr. Baghel to allegedly tarnish the image of the BJP leader.

The then State BJP government had transferred the case to the CBI which has filed the charge sheet in the case.

Chief Minister B.S. Yediyurappa will inaugurate the Command and Control Centre (CCC) built in Belagavi as part of the Smart City project, Union Minister of State for Railways Suresh Angadi said in Belagavi on Thursday. He was speaking to journalists after a visit to the CCC that is nearing completion. Several Smart Cities are utilising […]

The Supreme Court on Tuesday extended the deadline for publication of the final National Register of Citizens (NRC) for Assam from July 31 to August 31, 2019. A Special Bench of Chief Justice of India Ranjan Gogoi and Justice Rohinton F. Nariman, however, did not accede to the “fervent” pleas of the Union and Assam […]

Prime Minister Narendra Modi on Saturday offered prayers at the Himalayan shrine of Kedarnath, a day after campaigning for the general election came to a close. On Sunday, he is expected to be in Badrinath, another temple in Uttarakhand’s ‘char dham’ religious circuit. Dressed in a grey traditional pahari attire, Mr. Modi offered prayers for […]