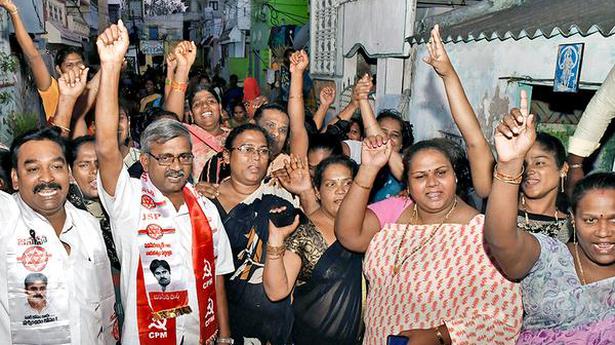 With the polling date just about three weeks away, candidates and parties in the city got down to the business of campaigning seeking the support of the voters across the three constituencies.

Major political parties including the TDP, the YSRC and the Jana Sena-Left alliance have recently announced their candidates.

While Ms. Shabana, daughter of sitting MLA Sk. Jaleel Khan, is much ahead of the rest in starting the campaign, others have just begun taking to the streets. She is accompanied by Kesineni Swetha, daughter of MP K. Srinivas. Mr. Babu Rao covered the constituency way before the election season began and is on another round of campaign as part of which he met the members of the transgender community at Kandrika on Tuesday.

He promised to address their problems by providing housing in Ajith Singh Nagar and make a law for the protection of the community. In a surprising development, Ms. Shabana met her father’s opponent and former city mayor Mallika Begum. Ms. Begum, who was against the candidature of Ms. Shabana, extended her a warm welcome into her house and offered sweets.

Also, senior politician Korada Vijay Kumar, who is going to contest independently in the West constituency, began campaigning. He said the public were vexed with the political parties that failed to solve several problems in the constituency since decades.

Mr. Rammohan Rao and Mr. Umamaheswara Rao along with Vangaveeti Radhakrishna, Mr. Vishnu and others are also campaigning in their respective areas.

Corporators and other party leaders are also campaigning at the grassroots level making door-to-door visits on behalf of the candidates.

Mr. Prasad boarded a city bus and interacted with passengers. He also drove an auto-rickshaw and asked auto-drivers to support the party.

Vangaveeti Narendra, cousin of Vangaveeti Radhakrishna who is son of slain Congress leader Vangaveeti Mohana Ranga Rao, joined the BJP in the presence of State chief Kanna Lakshminarayana in city.

An app to track offenders launched

A mobile application to track offenders during the lockdown period has been launched in Tiruvannamalai by the district police. Named as ‘Smart Cop’, installed by all ranks of policemen in the district, the app is being implemented from Monday, said Superintendent of Police M.R. Sibi Chakkaravarthi, who launched the app on Sunday. The Smart Cop […]