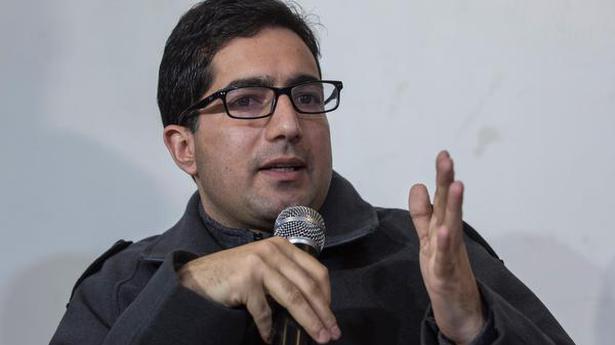 Former IAS officer Shah Faesal, who is under detention, has been taken to a makeshift detention centre at the Centaur Hotel in Srinagar, officials said on August 15.

He was shifted from his home to the hotel during the night, they said.

Mr. Faesal who was stopped from taking a flight to Istanbul at the Delhi airport during the intervening night of August 13 and August 14 was flown back to Srinagar where he was detained under the Public Safety Act (PSA), they said.

During preliminary questioning, Mr. Faesal said he was taking a connecting flight to London from Istanbul, the officials said.

After being detained at the Delhi airport, he was again detained under the PSA on his arrival in Srinagar, the officials said.

Mr. Faesal had criticised the “unprecedented” lock-down in the Valley with its eight million population “incarcerated” like never before post the removal of special status to Jammu and Kashmir, provided under Article 370.

He is among the last political leaders who have been placed under house arrest.

Former Jammu and Kashmir Chief Ministers Farooq Abdullah, Omar Abdullah and Mehbooba Mufti were detained after the Centre revoked the special status and announced that the State be bifurcated into the territories of Jammu and Kashmir, and Ladakh.

The Jammu and Kashmir authorities last week airlifted a fresh batch of 20 “potential troublemakers” from Srinagar to Agra as a precautionary measure in the wake of constitutional changes made by the government.

Among those airlifted include president of Kashmir High Court Bar Association Mian Qayoom.

The Lok Sabha on Monday passed a bill which provides a mechanism for social, economic and educational empowerment of transgenders. The Transgender Persons (Protection of Rights) Bill 2019 was passed by a voice vote amid noisy protests by some opposition parties over Congress leader Adhir Ranjan Chowdhury not being allowed to speak on his adjournment […]

A soldier was killed by suspected militants in south Kashmir’s Pulwama on Wednesday. Ashiq Hussain of J&K Light Infantry was shot at by masked gunmen outside his home at Naik Mohalla in Pingleena village in the afternoon, a police official said. The 25-year-old soldier had come home last month. A joint team of the army […]

The Kottayam Press Club witnessed dramatic scenes on Wednesday after members of the Malankara Orthodox Syrian Church staged a protest against leaders of a ‘people’s council for peace’ which plans to take out a march to the Catholicate Palace at Devalokam, near here, on May 10. The drama began to unfold around 12 noon when […]