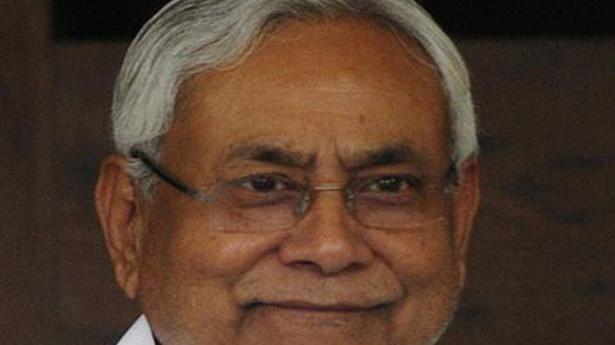 The Janata Dal (U) reacted with some relief to Union Home Minister Amit Shah’s statement to a television channel that his party would go into the Bihar Assembly polls in 2020 under the leadership of Chief Minister Nitish Kumar, ending all speculation that the BJP was mulling its options.

Bihar Minister and JD(U) leader Sanjay Jha, said on Twitter: “I appreciate BJP president Amit Shah’s statement quelling rumours about the “rift” in our alliance. Together we are committed to continue to brighten Bihar.”

Senior BJP leader and former Union minister Sanjay Paswan had publicly espoused his view that Mr Kumar should be replaced by a BJP candidate for chief minister, while others in the State unit had felt that if not a change in chief ministerial candidate, the BJP should demand an equal number of seats in the seat sharing arrangement.

Senior sources in the party said that particular demand will still stand when seat adjustment is discussed closer to the polls.

“Mr Shah’s statement makes it clear that the leadership question is settled. He is clear that he does not want a three-way fight in Bihar. The question of the number of seats each party will fight is still open,” say sources.

Sources in the JD(U), however, feel the fact that Mr. Kumar will be the chief ministerial candidate for the alliance in Bihar, will prevent any reduction in its status in the alliance, unlike what happened to the Shiv Sena in Maharashtra, with the party contesting fewer seats than the BJP in the State. “Nitish Kumar is the CM face, and, therefore, his party will be big brother,” said a source.

BJP leaders may not exactly agree with the postulation as they feel that the political ground has shifted in their favour in Bihar because of Prime Minister Narendra Modi’s leadership. The last time the two parties fought an Assembly poll in an alliance was in 2010, where the JD(U) got a lion’s share of the seats at 142, and the BJP fought on 101 seats in the 243 member House.

“Certainly the seat adjustment will be more equitable than that,” said a senior leader from Bihar.

Will go it alone in Delhi if AAP goes back on stand: Congress

The Congress on Friday officially announced that it will be compelled to go it alone in Delhi if the Aam Aadmi Party wants Lok Sabha seats in States such as Punjab and Haryana. P.C. Chacko, the All India Congress Committee in-charge for Delhi, however, kept a window open by indicating that the party wants to […]

Congress leader Adhir Ranjan Chowdhury on November 19 raised the issue of withdrawal of SPG security cover to the Gandhi family, but the government said he cannot raise the matter in Zero Hour as he had not given a notice for the same. After the notice of adjournment motion given by the party on the […]