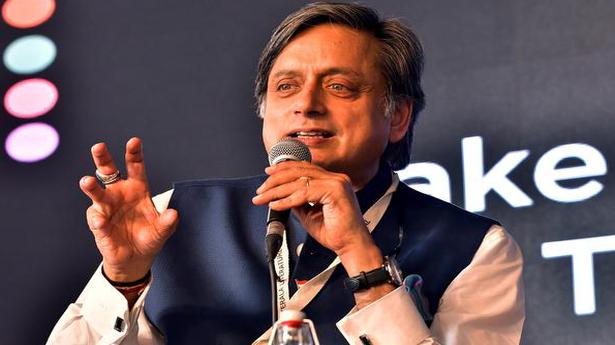 A Delhi court on Saturday summoned Congress leader Shashi Tharoor on June 7 on a complaint over his remarks that an unnamed RSS leader had compared Prime Minister Narendra Modi to “a scorpion sitting on a Shivling.”

Mr. Tharoor had claimed in October last year that an unnamed RSS leader had compared Prime Minister Modi to “a scorpion sitting on a Shivlinga”. He had termed it as an extraordinarily striking metaphor.

The complaint also describes Mr. Tharoor’s statement as an “intolerable abuse” and “absolute vilification” of the faith of millions of people. The complaint was filed under sections 499 and 500 of the Indian Penal Code (IPC), relating to defamation.

As Mr. Tharoor’s comments at the Bangalore Literature Festival last year drew condemnation, the MP tweeted saying the remarks were not made by him and were in the public domain for six years.

In his speech at the festival, Tharoor had said, “…There is an extraordinarily striking metaphor expressed by an unnamed RSS source to a journalist which I quote, in which they express their frustration with their inability to curb Mr Modi. The man says Modi is like a scorpion sitting on a Shivaling. You cannot remove him with a hand and you cannot hit it with a chappal either,” he had said.

Tamil Nadu’s fiscal deficit is estimated to be 2.84% for 2020-21, well below the 3% fiscal norms while the State’s revenue deficit is likely to double to ₹21, 617.64 crore compared to the projection of ₹10,040.31 crore, Deputy Chief Minister and State Finance Minister O. Paneerselvam said. Presenting the annual State budget for 2020-21 in […]

Water yet to be released by Karnataka from Narayanpur

Release of water from Narayapur dam in Karnataka to Jurala reservoir in Jogulamba-Gadwal district is yet to begin as on Sunday evening. According to the Irrigation Department officials, supplementation of water to Narayanpur dam from Almatti for the purpose of releasing 2.5 tmc ft to Telangana to meet the drinking water needs of combined Mahabubnagar […]

Tripura Chief Minister Biplab Kumar Deb expressed serious concern over lockdown violations in Bangladesh that recently hit the headlines, and felt need for extra surveillance on the border. In a televised speech on April 19 night he stated that police and the Border Security Force (BSF) were given instructions to spoil infiltration bid through unfenced […]