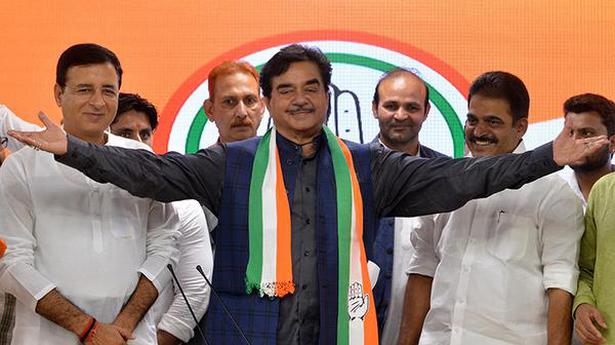 Rebel BJP MP from Patna Sahib Shatrughan Sinha joined the Congress on Saturday. He will contest the Lok Sabha election from the seat against BJP candidate and Union Minister Ravi Shankar Prasad.

The two-term MP said he left the BJP, on its foundation day [Saturday], with “immense pain and a heavy heart”.

Slamming the party in his inimitable style, the actor-turned-politician said, “The BJP has become a one-man show and two-man army.”

He also heaped praise on Congress president Rahul Gandhi, calling him a “dynamic, tried, tested and successful leader and the face and future of India”.

Mr. Sinha turned a rebel after he was denied a berth in the Union Cabinet under Prime Minister Narendra Modi. Ever since, he has spared no chance to attack the Prime Minister and the BJP-led NDA government.

He recently said that he had been advised by RJD chief Lalu Prasad to join the Congress.

Senior Congress leader M. Mallikarjun Kharge criticised the Union government and alleged that it had fixed the dates for the Assembly elections in Maharashtra and Haryana as per its own convenience. Speaking to presspersons here on Saturday, Mr.Kharge, who is also Maharashtra in-charge for the party, said that the Election Commission of India (ECI) should […]

A special court here has permitted a consortium of 15 banks led by the State Bank of India (SBI) to utilise movable assets of former liquor baron Vijay Mallya towards repayment of his debt. The assets, comprising financial securities like shares of the United Breweries Holdings Ltd (UBHL), were attached by the special Prevention of […]