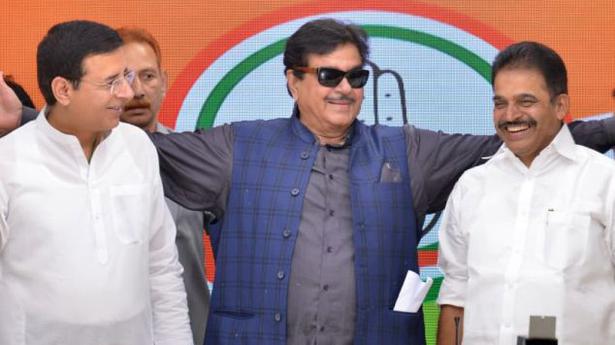 Actor-turned-politician Shatrughan Sinha joined the Congress on Saturday at the party headquarters in New Delhi.  He was with the BJP till recently.

“The BJP has become one-man show and two-men army,” said Mr. Sinha after joining the Congress.

Mr. Sinha had been at odds with the BJP over several issues and criticised the demonetisation exercise and the implementation of the Goods and Services Tax. He even attended the rally hosted by Trinamool Congress chief Mamata Banerjee in Kolkata in January 2019 as a representative of the Rashtra Manch, a political action group launched by former BJP leader Yashwant Sinha.

“My elder brother Yashwant Sinha was saying that after this I will be definitely removed from the party, I told him koi baat nahi hai  [no problem],” he said at the rally attended by several Opposition leaders.

The Indian Embassy in Turkey on Tuesday issued a travel advisory for Indian citizens urging “utmost caution” while visiting the country because of Ankara’s ongoing military campaign in northeastern Syria. The public notice was issued even as the Indian envoy posted messages on social media in support of greater India-Turkey people-to-people contact. “Although there have […]

A.P. Cabinet gives its nod to the contentious three-capitals proposal

The Andhra Pradesh (A.P.) Cabinet has cleared the decks for the development of Amaravati, Visakhapatnam, and Kurnool as the Legislative, Executive, and Judicial capital cities respectively, in its meeting held before the special Assembly session began on Monday. AMRDA to replace APCRDA The Cabinet also gave its nod for the APCRDA Repeal Bill, 2020, paving […]

Indore gets cleanest city tag for third year in a row

Indore was adjudged India’s cleanest city for the third straight year in the central government’s cleanliness survey announced on Wednesday. The second and third positions in the category were grabbed by Ambikapur in Chhattisgarh and Mysuru in Karnataka. The Swachh Survekshan awards 2019 were conferred by President Ram Nath Kovind at a ceremony in New […]